Home » Medically Related » Other Items of Interest » Technology » Predictive Analytics, BigData Software As A Service, Fun With Dick and Jane As Anyone Can Model Here With Machine Learning, Might Start Giving Mobile App Creation Some Competition..

this is a pretty interesting site and I covered it a while back when it was new and there’s a lot more going on there today.  Everybody wants those predictive analytics and know what their future will be,

well models don’t always get it right but the reason for them is to provide us a path to follow.  This is a site called bigml and they have quite things going on over there now and have some open source APIs and libraries.  Everyone wants those libraries to save some time that’s for sure.  That is all listed in the “hard hat” developers area, not where you want to go as a consumer or one who wants to just create a model.  You go right over to the depositories at GitHub.

If you go through the gallery, you’ll see a model for just anything you can think of and there are categories to make it easier.  Some on here will give you their model while others are going to make a buck on selling you their model, again things vary.

You need to either upload your data base or point to a cloud location where it can be accessed. You can upload files as larger as 64 GB or 5TB if you use some remote buckets.

BigData Modeling and Analytics Goes Into Mass Production Based on SaaS Machine Learning Platform to Create Predictive Models in Minutes–Accountability, Accuracy Still Needed By All Means – “Models Without Borders”

So we have one click to create a model and this is where the machine learning comes in and determines the most relevant patterns in your data base and the bot builds a predictive model from there. 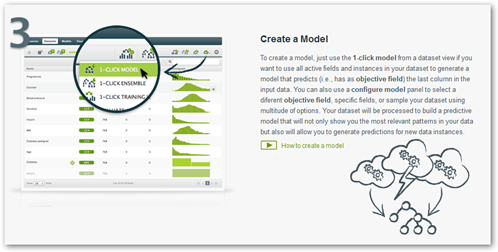 Wow and now you are a genius in knowing everything about the future of the items you included in the data base, right…well not exactly but you can see trending and some good analytics there to maybe get your thinking in a new direction or just some of the simple items sorted could be enough too.  You don’t have to stop there, you can go to the next level and create an ensemble…with many visuals for each parameter.  So if you are a doctor and don’t agree with what the insurer models are tell you, then go do your own thing and sure I’m a little tongue and cheek here but you might be doing this some day as “the battle of the algos” gets more complex as we keep going with adding additional layers in our software platforms today.

Ok went and looked though the gallery and found one that is pretty useless for on the whole unless you are a hospital or doctor want to know what the results are of a survey that was done about how many patients will give you a good rating of 9 or 10 …yeah we all hate those rating sites as there is so flawed anyway, that’s why this one is good example of some nonsense…it has a model, but who cares <grin>. Here’s the description of the model from the site…like I said who gives a darn..

“Model that predicts which percentage of patients will rate a hospital at 9 or 10, based on a dataset of hospital patient surveys. It shows which survey items and which scores are important for a good overall result. The data is from a list of hospital ratings for the Hospital Consumer Assessment of Healthcare Providers and Systems (HCAHPS). HCAHPS is a national, standardized survey of hospital patients about their experiences during a recent inpatient hospital stay. “

You get something like this where you can change the graphics, vary support and output percentages….la te dah..very cool graphics…

Or we can do this graphic…and boy those images are so pretty and if I can created this model I might be busting my fanny to get in touch with the New York Times, Wall Street Journal, etc. to show reporters what I just did <grin> and I might se my work reference if a reporter decides that I had the intelligence to predict how many patients might give hospitals a 9 or 10 rating, and then of course if this is not really new breaking stuff, you can just wait and see how many you get, it’s all relative and goes back to context with data today.  I did not do this model and the creator has several other models there and my use here was to just show the relationship of value or no value and what is the context you want. 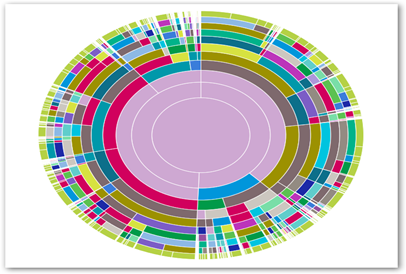 A related post you should read too is how you can and do get fooled with some of this.  Personally myself I’m up to my ears in stats and it makes me nuts unless there is something out there that has value.  I might be interested in how many cases of the flu there are in California since I live here for example, but gosh darn I get tired of the “could and might” words when there’s a lot just flat out guessing going on.  There are some exceptions of course but the noise on Twitter for example is full of it, “see a story with stats no matter what it is, man that’s news and get that re-tweet out there”….and we can reference the stupid coffee studies for one as we all know those and it makes the point about value real clearly:)

There’s some models on here using CMS data, you look around and browse, but remember these are models that have no guarantee on accuracy or value, although the creators want to think they have that and I’m sure worked to create it…if you go to the banking and financial area, it gets interesting..

very interesting and I’m not saying anymore than that as there are private models on there too.  There’s one model that is said to predict IPO success..haha…you buy that one..well there’s a model for it along with a lot more.  If you are a company and want a data scientists, those levels vary too and this online school says they can crank one out for your company in 12 weeks..I know it sounds like they are a commodity..

Again just don’t get fooled as these are models..and we still have to work and function in the real world and thus so goes the saga of models that work.  Hedge funds are closing up as their models don’t work anymore, but we all wonder how accurate some of those were and how much risk they hid to make money. After a w

hile sometimes models just don't work anymore and economic conditions certainly have an impact there.  Heck you never know you could have junior bankers over here building models under a pseudo name too…anything goes as nobody in the government really checks models and code.  Visit the AlgoDuping page for some great videos that are pretty much at layman’s levels that will help you understand models.

Modeling is not simple and like the government found out with Healthcare.Gov, you can’t just pull anyone human in that writes code or knows a bit about math and expect them to produce Algo Fairies…right now with complexities it’s pretty easy to say we are hostages of our own tools and infrastructures as if we keep up at the rate we are going looking for math miracles, everything will just come to a stand still as it is getting hard to create tools and models that work.  You see right  now with health insurance exchanges…models are not working too well are they but eventually thing will work as coding corrections are written.  The bubbles will burst when large amounts of models and code all fail together.  BD