Edwards Lifesciences will now have some competition in the Aortic valve business.  The device is 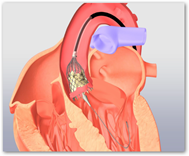 beating out medication therapy as noted in clinical trials but Edward is not happy and has a filed a lawsuit to try to block the sales of the Medtronic CoreValve.  I guess we have moved forward from stent wars to valve wars.  UCLA began using the Edwards valve back in 2012.  Edwards was recently awarded $392 million in patent infringements with a lawsuit against Medtronic.  Medtronic is no stranger to having to pay out on patent infringements as there was this case from years back with a Los Angeles doctor.

The valve improves quality of life for most and some bedridden patients get out of bed and resume lives that are much closer to normal.  The price for either valve is said to be close and Edwards has another valve in the pipeline with the Sapien XT.  It’s a long training process for the doctors and Medtronic plans to begin right away.  The valve is meant for patient who cannot withstand open heart surgery, so common sense tells us that the valve will be something in consideration for seniors.  Medicare though with their rules is not so easy on approving the valve as the documentation process to show that a patient can’t withstand open heart surgery is quite a bit.  The valve itself costs around $30,000, and hospitals don’t many any money from it.  BD 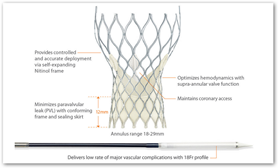 The U.S. Food and Drug Administration granted approval for CoreValve, used to replace damaged aortic valves, three months earlier than Medtronic had previously forecast. The approval allows the Minneapolis-based company to begin competing against rival Edwards Lifesciences Corp., whose similar device, called the Sapien, was first approved in the U.S. in 2011. The Sapien has since been approved for patients, including those who are eligible for surgery, but who are considered at high risk for complications.

The CoreValve is approved for patients who are too sick or frail to undergo open-heart surgery for severe aortic stenosis, a narrowing of the aorta that blocks the flow of blood into the body, leaving patients at a high risk for stroke and death. In a clinical trial, patients receiving the device had a 25.5% rate of death or major stroke after one year, compared with an estimated rate of 43% had the patients received medication therapy

Edwards is seeking a preliminary injunction that would bar Medtronic from selling CoreValve in the U.S., but such a ruling is considered unlikely by analysts. Medtronic said that it would begin selling the device immediately. There are about 45 medical centers that have experience with the devices through clinical trials, and Medtronic will begin training new centers over the next 12 to 18 months, said Ms. Robb.