Yes indeed, Kathleen Sebelius is the expert here on technology, never mind the “Sebelius Syndrome” that haunts here and Congress and many others.  I just though this was kind of humorous to see this as she’s been so far off base and has pretty much been a healthcare magpie when speaking for the most part.  This news article here states 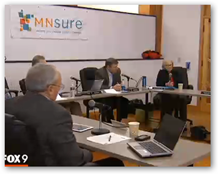 she made the recommendation.   She has no clue and look what happened when she told Healthcare.gov to ahead open up the exchange…she waits for the algorithm fairies and has no data mechanics logical thinking by all means.

Anyway the state has called in a division of United Healthcare, Optum Insights I assume as that’s their technology and coding writing arm.  Just recently the state hammered on IBM (link below) and if you read recently even IBM with their Watson project which they are expanding on said their technology needs more time to learn.

Minnesota Health Insurance Exchange The Latest Troubled Website With The State Hammering On IBM To Get Things Fixed..All The Algorithm Fairies Have Flown the Coup A Long Time Ago…

UnitedHealthcare, by the way is not participating either as an exchange carrier in Minnesota.  The State is thinking about going back to paper, so Sebelius just pulling a name out of the contractor hat.  In the video they go right out the door to find the man on the street who can’t get enrolled.  Way back in May they took the main contract away from Maximus…watch the players on the video, they just kind of shrug and chuckle a bit.

People have been able to sign up, 72,000 and only 1/3 are for private insurance.  If there’s money to be made United is there and if not directly they have about 15 pages of subsidiaries to find one, perhaps under the Optum umbrella to send in.  You can’t lose sight of the fact that United has proprietary software and you can’t see the models or code so just remember back on how slick it worked for 15 years to pay doctors and patients short on out of network visits, and they licensed the algorithms to most of the other major insurers, so are they the perfect answer?  I think that’s a good question and I still remember the 2007 biggest derivatives settlement in history against the former United CEO and company for backdating stock.  The QSSI subsidiary who is working on the Federal site and now on the Maryland site  was not mentioned so could be them or another subsidiary who writes code they have plenty that write some kind of code and even have a few medical records programs they sell.

Cerner integrated about 4 years ago into their system.

Recently I keep reading about folks questioning the revenue cycling certification software in thinking that hospitals who buy such systems are cheating, well if you trace back to the creator of the software…well what do you have here…insurers getting to be big to fail too?

The Supreme Court in another area (link below) actually gave doctors some relief on predatory contracts with doctors with a UnitedHealthcare lawsuit,  so they can now group together to litigate instead of one doctor against the corporation, they took this all the way up to the Supreme Court and in some areas United has been confronted by the AAFP on where they are paying doctors at rates than Medicare (complex math modeled contracts do this). Doctors are already using this Supreme Court decision as the medical associations of California, Florida and Texas to name a few have signed on to the lawsuit filed against United for cutting doctors seeing Medicare Part D patients.

Anyway the choices with contractors in Minnesota is interesting as the first contractor they got rid of in May, Maximus  paid over $30 million to settle Medicaid fraud in 2007 but again that’s kind of small compared to the $468 million paid by the former United CEO also in the same year and worth a mention since we are bringing up the Maximus fraud case.   In a legal brief on the web I read where other executives as well as the CEO had backdated stocks too but he took the fall for all of it as he had the lion’s share.   By the way McGuire, the former CEO is now sitting on a couple healthcare company boards and living quite well in what you might call a mansion in the state.

So yeah, it’s interesting is it not on the selections and recommendation of contractors of late?  I think so.  Again I assume this is the Optum Insights division that has been called in but not sure since they have quite a few subsidiaries that write code, billing software, analytics and so on,  15 pages at the SEC.    Digital Illiteracy in government and politics just don’t mix very well do they.  BD

Minnesota's health marketplace faces another major deadline on March 31, and its website still isn't up to par. On Thursday, a legislative oversight committee will take a closer look at MNsure's flubs as applicants continue to look for answers.

MNsure is hiring another consultant to figure out why things went so terribly wrong.

With a still glitchy website, and 50-minute wait times through their call center,

MNsure is now talking about resorting to old fashioned paper applications. MNsure has now hired Eden Prairie-based consultant Optum, a division of United Health, to offer a top to bottom review of what went wrong with MNsure's rollout, and why.

So far, MNsure has paid out $25 million to its contractors. $8 million to IBM and $4.7 million to Maximus, a company once paid $30 million to settle Medicaid fraud charges. Maximus had overall responsibility for MNsure technology, or so everyone thought.