Home » Medically Related » My Commentaries » Other Items of Interest » Technology » Emotion Labeling Software to Assist Autistic Patients Turns Into Facial Expression Algorithmic Program Wanted by Marketers to Make Money, Face Coding The Next Invasion Of Your Privacy As Marketers Have No Limits On How They Want To Obtain Anything Measurable for Quantitated Engagement Stats…

Emotion Labeling Software to Assist Autistic Patients Turns Into Facial Expression Algorithmic Program Wanted by Marketers to Make Money, Face Coding The Next Invasion Of Your Privacy As Marketers Have No Limits On How They Want To Obtain Anything Measurable for Quantitated Engagement Stats…

another company.  Now we have this emerging into to the field of marketing.  Next time you go for an interview, get a Phantom of the Opera mask to wear and torture the algorithms with only partial information (grin).

“Affdex originated with academic research founder Rana el Kaliouby conducted into autism. Those affected by autism can’t recognize emotion in human expressions the way most people can, and el Kaliouby first sought to use emotion-labeling computers to assist autistic patients. Marketers quickly saw the utility of the system for them and el Kaliouby spun off a company.”

That almost sounds painful, face coding and you get “cloud based emotion analytics”…everyone wants to know how you are engaging.  As you can see from the image above one use is to create brand loyalty and I have issues with that because instead of relating like humans, you get enough of this around you and all you relate to is a brand and not a human…good for the ad business, bad for the human business. 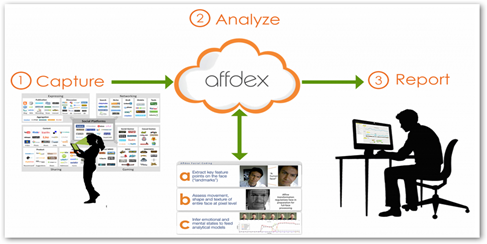 So already Procter and Gamble, Pepsi and other big companies have already used such services.  Here’s another company, Emotient…

It measures lip pucker, has a dimpler, jaw drop…geez…even a nose wrinkler…and micro expressions…how far do you need to go.  Well gee I just had a micro expression (grin).  Again it’s all about customer engagement and any frigging thing they can think of to analyze.  This is definitely sending people the other way, it is me.

And again hard to police and regulate..one more that needs a data selling license for sure. 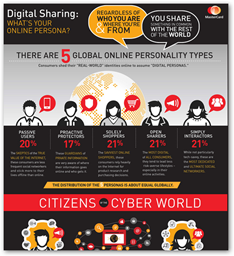 Sure you bank could see your expression when they tell you that the determined that you are” “Underbanked”..and speaking of such read the link below as you have some bull shit marketing from MasterCard talking about their engagement bureau…give me a break the marketing makes me want to puke and it gets pukier with the marketing telling you they have great news, they have identified one of give personas in which you below…yuk!  Just look at the image at the right from the MasterCard page…do you give a rat’s ass which online personality you are?  Don’t get sucked in too fast…

MasterCard Recruiting Software Engineers For New e-Commerce Technology Lab, Maybe More Slicing and Dicing of Our Data To Sell to Insurance Companies for One? Be Wary of Corporate “Algo Dupers” Out There Feeding on “Non Skeptical Consumers”…

It’s an illusion, listen to former Goldman Sachs Quant below…he tells you it’s not something you can count on, you know it’s not going to be right…people don’t work the same as all the algorithms do and you can get some indications but this too will taken too far and out of context for sure, you can see that coming.  One little twitch of your nose and you have thousands of algorithms evaluating that one twitch…excuse me…do we really need all of this so the marketers can make more money.  There’s no benefit for the participant and it’s gray on how this could be used to access web cams on computers.

This link below has more information to help you understand how you get duped with a lot studies and stats that are not true.

So we come down to Algo duping and The Killer Algorithms basically on a lot of this and there’s more videos and links to help you understand how the financial and healthcare world preys on you at times, as the old saying goes “just throw numbers at them to get them to buy in”.  BD

A handful of companies are developing algorithms that can read the human emotions behind nuanced and fleeting facial expressions to maximize advertising and market research campaigns. Major corporations including Procter & Gamble, PepsiCo, Unilever, Nokia and eBay have already used the services.

Companies building the emotion-detecting algorithms include California-based Emotient, which released its product Facet this summer, Massachusetts-based Affectiva which will debut Affdex in early 2014, and U.K.-based Realeyes, which has been moving into emotion-detection since launching in 2006 as provider of eye-movement user-experience research.

They’ve all developed the ability to identify emotions by taking massive data sets — videos of people reacting to content — and putting them through machine learning systems. (The startups have built on a system of coding facial expressions developed in the 1970s for humans to carry out.) Machine learning is the most straightforward approach to artificial intelligence, but it’s mostly limited to deductive reasoning and isn’t likely to give rise to nuanced artificial intelligence.

“It would be very difficult for the companies to ensure consent of third parties, especially if the technology becomes mobile — that is, if it is used as part of a mobile application. We’ve already seen instances where similar technology has been used in televisions without consumer consent,” privacy advocate McCall told Singularity Hub.