Home » Medically Related » Pharma/FDA News » Technology » Steven Pinker, Harvard Professor of Psychology talks about his genome, what he found out, what he learned, and how the psychological interpretations are somewhat still up for discussion

Steven Pinker, Harvard Professor of Psychology talks about his genome, what he found out, what he learned, and how the psychological interpretations are somewhat still up for discussion

“Steven Pinker is Harvard College professor of psychology at Harvard University and the author of “The Stuff of Thought: Language as a Window Into Human Nature.”

Steven Pinker was one of the first 10 volunteers to have his genome sequenced.  This is a rather lengthy, but well worth reading article on what he found out about himself and how the process took place under the direction of George Church.   The image below shows pictures of the first 10 individuals who in turn have made their records public as part of the agreement to further the science. 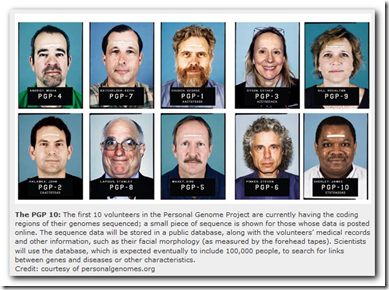 One other individual who as participated is  Dr. John Halamka, CIO of Beth Israel Deaconess/Harvard.  He has also spoken about how his results were analyzed and the information he obtained from the process.  You can find his blog here and under the blog roll on the site.  His picture is the first one on the second row.

When you read through some of the information discovered, and the way he describes what it meant and some potential contradictions or perhaps items that were a bit more complicated than anticipated, it drives home the point that the interpretation of the expressions are also very complicated as there’s a lot of information to examine and analyze and compare against other information derived.

One example is when he finds out he has a lower rate for prostate cancer he is relieved a bit as anyone would be; however, when linked to other available studies he found out differently; some of his genes did have an elevated risk for prostate cancer, so the interpretation is very much key here and having all the information to re-evaluate against other information derived from the expressions.

The related reading below has several additional posts and background information on the human genome and sequencing processes.  The interview I did a short while back with Dr. Patrice Milos from Helicos gives quite a bit of information on the machine process portion of the business, one I really enjoyed doing as well.  This is very interesting as more of the initial 10 volunteers come forward and enlighten the rest of us on what effects the information has and perhaps where the next level may be.  BD

Last fall I submitted to the latest high-tech way to bare your soul. I had my genome sequenced and am allowing it to be posted on the Internet, along with my medical history. The opportunity arose when the biologist George Church sought 10 volunteers to kick off his audacious Personal Genome Project. The P.G.P. has created a public database that will contain the genomes and traits of 100,000 people. Tapping the magic of crowd sourcing that gave us Wikipedia and Google rankings, the project seeks to engage geneticists in a worldwide effort to sift through the genetic and environmental predictors of medical, physical and behavioral traits.

The Personal Genome Project is an initiative in basic research, not personal discovery. Yet the technological advance making it possible — the plunging cost of genome sequencing — will soon give people an unprecedented opportunity to contemplate their own biological and even psychological makeups. We have entered the era of consumer genetics. At one end of the price range you can get a complete sequence and analysis of your genome from Knome (often pronounced “know me”) for $99,500. At the other you can get a sample of traits, disease risks and ancestry data from 23andMe for $399. The science journal Nature listed “Personal Genomics Goes Mainstream” as a top news story of 2008. 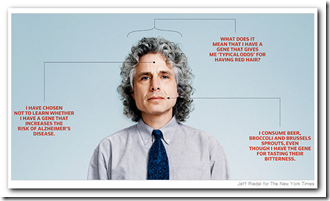 Only a portion of my exome has been sequenced by the P.G.P. so far, none of it terribly interesting. But I did face a decision that will confront every genome consumer. Most genes linked to disease nudge the odds of developing the illness up or down a bit, and when the odds are increased, there is a recommended course of action, like more frequent testing or a preventive drug or a lifestyle change. But a few genes are perfect storms of bad news: high odds of developing a horrible condition that you can do nothing about. Huntington’s disease is one example, and many people whose family histories put them at risk (like Arlo Guthrie, whose father, Woody, died of the disease) choose not to learn whether they carry the gene.

The two biggest pieces of news I got about my disease risks were a 12.6 percent chance of getting prostate cancer before I turn 80 compared with the average risk for white men of 17.8 percent, and a 26.8 percent chance of getting Type 2 diabetes compared with the average risk of 21.9 percent. Most of the other outcomes involved even smaller departures from the norm. For a blessedly average person like me, it is completely unclear what to do with these odds. A one-in-four chance of developing diabetes should make any prudent person watch his weight and other risk factors. But then so should a one-in-five chance.

It became all the more confusing when I browsed for genes beyond those on the summary page. Both the P.G.P. and the genome browser turned up studies that linked various of my genes to an elevated risk of prostate cancer, deflating my initial relief at the lowered risk. Assessing risks from genomic data is not like using a pregnancy-test kit with its bright blue line. It’s more like writing a term paper on a topic with a huge and chaotic research literature. You are whipsawed by contradictory studies with different sample sizes, ages, sexes, ethnicities, selection criteria and levels of statistical significance.

I also have genes that are nothing to brag about (like average memory performance and lower efficiency at learning from errors), ones whose meanings are a bit baffling (like a gene that gives me “typical odds” for having red hair, which I don’t have), and ones whose predictions are flat-out wrong (like a high risk of baldness).

My Genome, My Self - Steven Pinker Gets to the Bottom of his own Genetic Code - NYTimes.com