Home » Medically Related » Other Items of Interest » Personal Health Records » Bankruptcy Trustee and Shuttered Hospital Dispute has 37,000 Patient Medical Records Unavailable to Doctors and Patients – All About Money and not Healthcare

Bankruptcy Trustee and Shuttered Hospital Dispute has 37,000 Patient Medical Records Unavailable to Doctors and Patients – All About Money and not Healthcare

With all the talk of recently having your medical records available, this one sure makes a case for it, and the need to set up a PHR, as the records would be available for patients to share if they had one, so hospital bankruptcy seems to be another good reason for exploring this option.

The folks in Half Moon Bay are the ones who lose on this entire dispute, so in the meantime it will serve to raise healthcare costs more than likely with additional tests being run and other related expenses that come along with having to reconstitute a chart.  Everyone is upset over the cost to store all the paper charts, and the tab keeps running.  If the hospital had gone electronic, we probably wouldn’t be seeing this battle.  The trustee is trying to nullify the bankruptcy filing, which is just dandy, so it’s all about money and not about healthcare in Half Moon Bay, CA.  Amazing how a bankruptcy is actively interfering with medical care and records the physicians need.  On the website though, I did find this notification that assured that records would be mailed, but this was only until a trustee was appointed, so it somewhat sounds like now that the trustee has gone to work on the issue, folks could be out of luck.  The cost of $40,000 so far to store the records could have made a nice payment on scanning and perhaps cataloging the records for future use too, maybe.  BD 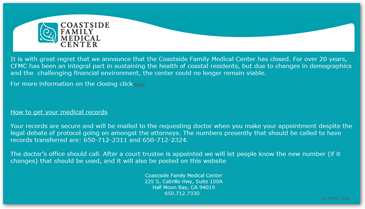 “How to get your medical records

Your records are secure and will be mailed to the requesting doctor when you make your appointment despite the legal debate of protocol going on amongst the attorneys. The numbers presently that should be called to have records transferred are: 650-712-2311 and 650-712-2324.

The doctor’s office should call. After a court trustee is appointed we will let people know the new number (if it changes) that should be used, and it will also be posted on this website.”

The trustee for the closed Coastside Family Medical Center has filed a court request to dismiss the clinic’s bankruptcy protections and put the responsibility for handling medical records back on the former leaders of the nonprofit.
The San Francisco trustee, E. Lynn Schoenmann, says she has done her job to seize all the remaining assets to pay off the creditors of the medical center. But the trustee says she should not bear the cost or legal liability associated with storing and distributing the thousands of patient records from the shuttered clinic.

Approximately 37,000 records from the former clinic are being stored at a private facility in San Jose, and are currently not being released to patients or their physicians — a situation that could be a medical disaster. Court filings say the trustee has paid $40,000 so far to store and manage the records.

“The (Coastside Family Medical Center) failed in their duty,” Schoenmann wrote. “Instead they have sought to foist that duty onto the Trustee, after they squandered the assets that would have … made such storage and access economically feasible.”
It is unclear what would happen to the inventory of patient records if the bankruptcy is nullified. Most if not all of the assets from the clinic have been liquidated, leaving no resources to finance distributing patient records. In her court motion, Schoenmann said the principals for the medical center “may be held liable to the extent they have breached their duty.”