This is another one of those stories it appears, certainly selenium is healthy but one a day is not going to keep the prostate cancer away says the 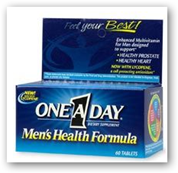 Science Group with their NIH study to prove it.  Bayer says the FDA said the ads were ok.  Wait a minute, is this the same group that called Cheerios a drug?

This is all over advertising, which the FDA themselves have had issues of their own in the past.  They were going to advertise a fake blood pressure pill for a survey?

What’s going on over at the FDA, can someone tell me as some of this doesn’t make much sense.  BD

Bayer HealthCare may get slapped with a lawsuit if it continues to run advertisements for its One-A-Day vitamins that claim the product reduces men’s risk of prostate cancer.

The Center for Science in the Public Interest, a Washington-based health advocacy group, is threatening to sue Bayer for “misleading men” about the benefits of its product.

The group said in a statement today that Bayer’s radio and TV ads falsely claim that selenium, an ingredient of One-A-Day Men's Health Formula and 50+ Advantage, helps prevent prostate cancer.

It does not, said David Schardt, the group's senior nutritionist.

To back its claim, the group cites a seven-year, $118-million study by the National Institutes of Health, which failed to find any evidence that selenium prevents prostate cancer in men. The study involved 35,000 U.S. and Canadian men.

Bayer spokeswoman Trisch McKernan told the Associated Press that the company stands “behind all claims made in support of our products.” She also said that the claims in the advertisements were approved by the Food and Drug Administration.