Some of those in the survey said raise taxes to protect the NHS and cut back in other areas.  There were mixed reactions too about private insurance and how it comes into play with many disliking the private system option.  I have seen some articles too where writers have created a portrait of 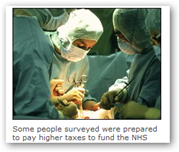 some of the private insurers as being less than honest too, such as stealing patient information lists to solicit, etc.  BD

Nine out of 10 people fear that NHS services could be cut and waiting times rise as the government tackles the recession, a survey suggests.

The British Medical Association poll of 1,000 people also found three quarters believed that other public services should take a financial hit instead.

The union said it showed the depth of feeling about the NHS.

Managers have warned the health service is facing a funding shortfall of up to £10bn for the three years after 2011.