Recently I had the opportunity to speak with Rob Lyles, vice president of the Peripheral Intervention division of Cook Medical. Just a few months ago Cook announced their new MicroWire technology for PAD (Peripheral Arterial Disease).
We have pretty much all heard about catheter technology and minimally invasive heart surgery, and now the same technology is used for treating the same blockages in the arteries of the legs, and this can be a life saving and extending procedure. BD 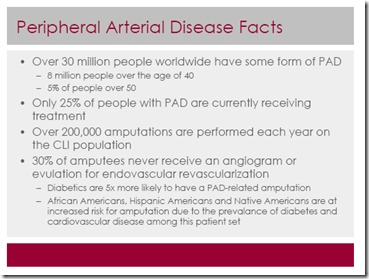 On with the interview:

I asked Rob what exactly the Leg Therapy Program from Cook Medical was about. From my understanding, the technologies Cook has designed to treat the legs have been used for heart surgery for a few years now, and since these solutions are going so mainstream I wanted to hear a little about how one finds out if they have PAD.
Rob let me know that 8-12 percent of the population today has PAD. Most do not know it: just as in heart blockage, it goes undetected. It can be deadly, cause strokes and basically be as much of a threat as blockage in the heart area. If caught early enough, life can be extended. The survival rate for Colon Cancer is actually better than PAD, but if given a choice between the two conditions most would choose PAD as the magnitude of the condition is really misunderstood or perhaps not understood at all by comparison.
We then moved on to discuss the warning signs associated with PAD. Rob said that one of the first indications that a person is suffering from the condition would be a feeling of heaviness and fatigue in the legs. As it progresses, pain comes along with exercise. When PAD is accelerated “Rest Pain” occurs, in other words pain when not moving and exercising.
When the advanced stages occur, the patient experiences wounds that will not heal and the patient could possibly be looking at amputation. With a blockage, the blood in the arteries is not moving as it should be. People with diabetes experience the same type of situation with wounds that will not heal and they are also a high risk for PAD. The lack of proper blood flow is very common, and perhaps more common than we believe.
Rob stated that he calls on many physicians and one doctor in particular made a statement that really makes sense. He stated you should always shake out your shoes. It sounds funny and odd maybe, but when circulation is not good, the feelings in the feet may not all be present, thus unless you look and see and pay close attention, one may not be aware of deformities, wounds, etc. that are taking place. He actually had one patient find a golf ball in his shoe, but was not aware as he had no feeling in that part of his foot. Once feeling is lost, other issues can set in, such as gout.
Rob told me there is a very simple procedure that can be conducted in any Primary Care Physician’s office to diagnose PAD. It is a matter of taking blood pressure at two points in the body, once from the arm and second from the ankle. What we are looking at is the systolic pressure and a formula calculates the risk factor. Anything below “1” would be considered a risk for PAD, such as an .06 reading. This is commonly called the ABI test.

That sounded simple enough, and since patients are now checking their own blood pressure, I wondered if they do a check on their own (This sounds like good Personal Health Records potential information to me). Rob said they certainly could and, if in doubt, could check with their doctor to run the blood pressure test as well.
We then returned to talking about Cook Medical products. Rob told me a bit about the alternatives Cook offers to amputation in extreme cases of PAD. He said that by using the same technology as what is used to open arteries around the heart, we uncover a lot of viable alternatives to open surgery and amputation. He also said that his recommendation to anyone who has seen a physician recommending an amputation is to get a second opinion. I found that fascinating. In years past, prior to this technology, we only had amputation as an answer, but not by today’s standards. If a limb is amputated as a result of PAD, an individual may only live another 2-3 years.
I posed Rob with a scenario, and asked whether I would have the same type of surgery on my leg as my heart if I were a PAD patient.
Rob said that actually, the arteries and veins in the legs are a bit more complex. Aside from pumping the heart is stationary, whereas the legs are constantly moving. We can still approach treating the legs in a minimally invasive way though. With placing a stent in the leg, extra care for durability is a big concern as again, the leg will be moving and the device needs to remain in place and not slip or move. 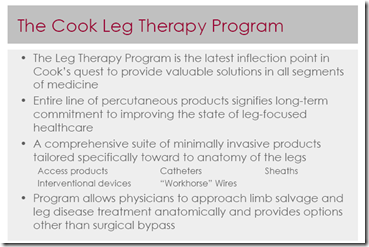 With Cook Medical Products, what would be my options?
Rob said that treatment options include bypass surgery, where a vein is rerouted around a blockage. A less invasive approach involves stenting, where a device is inserted that opens up the blocked

area. Cook’s flagship product is the Zilver PTX, a drug eluting stent that is presently in clinical trials. The stent is coated with paclitaxel, a cancer drug. The drug lasts in the body for 6-8 weeks, and is used to help prevent infections as well as decrease the chance of the body rejecting the stent. Our bodies are designed to heal and regrow tissue, so the drug also helps in that process with keeping excess tissue away from the area where the stent is placed. The procedure also has less risk for diabetics and those with high blood pressure and can be used for procedures related to hardening of the arteries.


I wondered if patients ever have to go back for a repeat procedure after the stent is in place. That process is known as reintervention, and Rob told me that Cook is calculating and reporting reintervention rate as part of the Zilver PTX clinical trial. Data from the study show that when comparing a medicated stent to a bare metal stent that has been put in place, the reintervention rate is cut in half. Rob said that bare metal stents are successful 70-80% of the time, while medicated stents are successful 90-95% of the time. That’s a pretty big difference.

Cook Medical stents do not use polymers, but rather relies on smooth muscle cells to mold with the arteries and veins.

I asked Rob to walk me through a stenting procedure. He said the first step in the process would be to access the blockage. A needle is inserted with a wire inside, which can also be used to guide a catheter or stent. Once the physician has access, he can follow the information on a computerized software screen for complete placement accuracy.

The surgery also has less risk for diabetics and those with high blood pressure and can be used for procedures related to hardening of the arteries.

Rob said that most procedures are covered by insurance companies as they are considered a preventative measure. If PAD isn’t addressed early, the patient’s condition could worsen down the road. With healthcare technology, we do have alternatives today versus the drastic procedures of the recent past, so it is up to us to be the informed patients and doctors. Rob said information on the Zilver PTX trial website (www.zilverptxtrial.com) could help educate both consumers and healthcare professionals on the new procedures that are available and also how clinical trial participation could be available in an area near you.
Thank you for your time today and enlightening all on this potentially life saving and live extending procedure!
Be sure and check out the related Cook Medical posts below.
Related Cook Medical Reading:
Cook Medical Unveils MicroWires to support Leg Therapy - Peripheral Arterial Disease

Regenerative Medicine and How it Works – Interview with Cook Biotech (Medical)