Has anyone ever heard of “assigned risk”?  Is this even a thought?  Maybe not with the current business models where cost could be spread out over a larger group of consumers.  If you follow the link to the article in the Los Angeles Times below they obtained a couple WellPoint documents showing employee evaluations.

We even have a website here in Los Angeles where these items can be reported:

One page for the consumer with drop downs to make data entry easier with carriers listed. 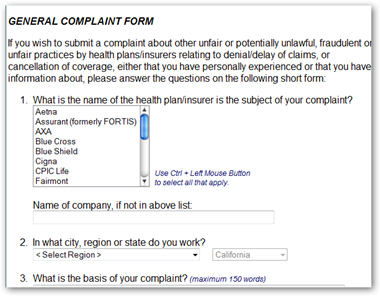 One page for providers with pretty much the same carriers listed and drop down menus. 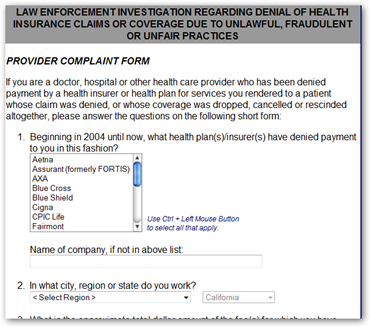 Late in the hearing, Stupak, the committee chairman, put the executives on the spot. Stupak asked each of them whether he would at least commit his company to immediately stop rescissions except where they could show "intentional fraud."
The answer from all three executives:  “No”


Executives of three of the nation's largest health insurers told federal lawmakers in Washington on Tuesday that they would continue canceling medical coverage for some sick policyholders, despite withering criticism from Republican and Democratic members of Congress who decried the practice as unfair and abusive.
The hearing on the controversial action known as rescission, which has left thousands of Americans burdened with costly medical bills despite paying insurance premiums, began a day after President Obama outlined his proposals for revamping the nation's healthcare system.

An investigation by the House Subcommittee on Oversight and Investigations showed that health insurers WellPoint Inc., UnitedHealth Group and Assurant Inc. canceled the coverage of more than 20,000 people, allowing the companies to avoid paying more than $300 million in medical claims over a five-year period.

How Similar is Wall Street to the Health Insurance Business