5 to 10 years for obesity or child neglect is the potential sentence if convicted for the mother.  She was instructed to bring her son in for medical 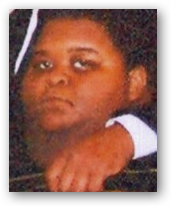 treatment and didn’t show.  There are a lot of unanswered questions here too, could she afford the treatment or was the tab being picked up.  That is the first thing that comes to mind for me.  He’s in protective custody now so someone will be watching what he eats.  BD

Authorities are searching for his mother Jerri Gray who failed to make a scheduled court appearance on May 19, 2009. The judge has ordered the 555 pound teen be taken into protective custody because of medical neglect and Gray's failure to appear in court.

Before fleeing town with her son, Jerri Gray had been contacted by the local Department of Social Services previous times about her son's weight and was even issued a treatment plan to turn around Alexander Draper's morbid obesity, Gray's attorney Grant Varner told ABCnews.com.

But when Gray failed to bring Alexander in for some of his medical treatment appointments recommended by the department and he continued to gain weight, the state sent notice that Gray would lose custody of her only child.