Finally the work and benefits of stem cells are beginning to evolve around us.  The patient had a heart attack, had permanent damage and by injecting his own stem cells the efforts of this procedure will hopefully reverse the damage and scarring done by the attack.  The program is under trial at Cedars Sinai in Los Angeles.  "Cardio-spheres" are created and can even start beating in the dish.  (video below).  This was a big decision and we certainly hope it works for him.  BD 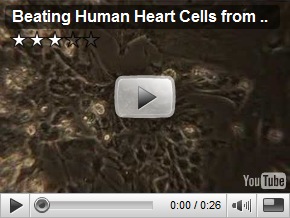 Also, from earlier this year at the TED conference in Long Beach, there was an excellent presentation on regenerative medicine and in part of the 20 minute video you can see stem cells actually being injected into a beating heart.  BD

(CBS) In a heart attack, the blood supply to part of the heart is shut off by a clot in a clogged artery - causing scarring of the heart muscle, which reduces the ability of the heart to pump.
The best that doctors have been able to do is to promptly open up the clogged artery and limit the damage with drugs.
But one day, there may be a way to get that damaged heart to grow its own brand-new muscle tissue. How? By using the patient's own cardiac stem cells.
This week doctors in Los Angeles have given a heart attack patient an infusion of stem cells grown from his own heart muscle.

So he volunteered be one of 24 recent heart attack patients in a cutting-edge clinical trial at the Cedars-Sinai Heart Institute - becoming the first person ever to get an infusion of his own heart stem cells.
"We seek to actually reverse the injury that has been caused by the heart attack, by re-growing new heart muscle to at least partially replace the scar that's formed," says Dr. Eduardo Marban of Cedars-Sinai Heart Institute.  In a trailblazing procedure new cells grow spontaneously from the specimens eventually forming into clusters called "cardio-spheres" that can even start beating in the dish. In 4 to 6 weeks, there are millions of stem cells.