One Woman’s Battle with Ingenix Who Has Cancer

The Ingenix data base story has now graduated up to ABC News.  They also provide other services to insurers and provide your prescription data along with another company.  You can read more here.

Recently an insurance executive also testified in front of the Senate on some of the practices from his inside view for years, good reading nice to be informed.  Health Insurance is almost like Forest Gump stated, “its like a box of chocolates, you just don’t know what you are going to get”.  BD

Senate Testimony – Insurers Confuse Consumers and Dump Those Who are Sick, a Wall Street Run System

After being diagnosed with ovarian cancer in 2006, surgery and chemotherapy helped the Yonkers, N.Y., woman enter remission for more 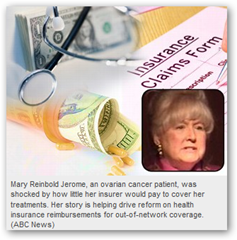 than a year. But the cancer recurred last October and Jerome is fighting for her life once more.

No matter how this new battle ends, Jerome said she's grateful for at least one victory: her struggles with her health insurance company will help bring about the demise of a database that critics say allowed insurers to routinely rip off patients who sought "out-of-network" care -- medical care outside of a patient's insurance company network.

While insurance companies have defended the database containing market rates for hospital procedures -- run by a company known as Ingenix -- they nonetheless have agreed to provide millions of dollars to discontinue the database and create a new, independent one in its place. Government officials told ABCNews.com that they are optimistic that the new database will be in operation by early next year.

These days, Jerome said, her health insurance company -- she now gets her coverage directly from UnitedHealth -- treats her very well.

"They know who I am now," she said with a chuckle. "I'm infamous in their eyes."