I received an email today referencing the President and Mrs. Obama relative to getting everyone involved and this includes healthcare as a primary target.  It’s no secret at this point that the economic standards today revolve around healthcare and it’s going to take a lot of cooperation and less of a greed factor to be successful.  The US is undergoing technological changes as well as major cultural transition we have never seen before and the 2 sometimes work together, and at other times clash.  If we can get rid of the latter and learn to perhaps work together better as teams I think we can stand to see progress being made, but it takes give and take from both sides.  BD

Last week, when President Obama announced United We Serve -- he called on all Americans to volunteer this summer and do our part to rebuild our communities. 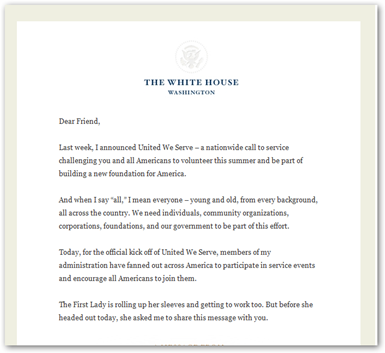 Defense Secretary Gates is spending time with our veterans at Walter Reed Army Medical Center and Commerce Secretary Locke is reading to children at La Mesita Homeless Shelter in Mesa, Arizona.  Just to name a few.
It's going to take all of us working together to build a new foundation for America and it will happen one community at a time. Watch this special message from the First Lady to learn how you can do your part: 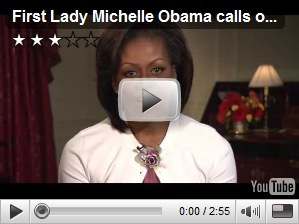 Today to kick off United We Serve, First Lady Michelle Obama, Cabinet Secretaries, and Senior Administration officials have fanned out across the country to participate in service projects.
The First Lady is rolling up her sleeves alongside the First Lady of California Maria Shriver and Corporation of National and Community Service acting CEO Nicky Goren to help build a public playground at Bret Harte Public Elementary School in San Francisco.