German Merck Outlook is to Acquire – Pharma and Chemical Sectors

The article states that Merck, one of the heavy cash companies around today is looking at expanding their horizons with acquisitions that fit the mold, perhaps smaller companies and not the larger biotechs.  Just recently I read where Merck in the 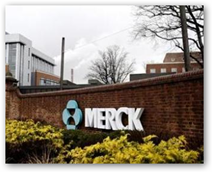 cash line was only behind Pfizer who was slated at having 52 billion laying around in “cash”.

One other item of interest too is that we always think of Merck as a pharma company only, when in fact their chemical division has interests outside of the drug business, as stated in this article Merck is the world’s largest manufacturer of liquid crystals that are used for flat panel displays, so I guess I might have Merck to thank for my display monitors and televisions that captivate so much of my time anymore. (grin).  One item brought forward here too is that operating margins above 50% these days just about no longer exist, which we kind of knew that anyway, but nice to hear, unless you happen to be in the banking business, but for us that are not and still produce products and services, it continues to roll downhill.  BD

"In principle, I can very well imagine acquisitions in both areas -- in the pharma and chemical sectors," Karl-Ludwig Kley was quoted by Sueddeutsche Zeitung in an excerpt of an article ahead of its publication on Monday.

Kley said that the company had enough funds to finance small as well as big acquisitions, but did not specify.

Regarding Merck's cancer drug Erbitux -- which was rejected for use to fight lung cancer by an influential European expert panel on drug approvals in November -- Kley said: "The fact that our drug Erbitux was not approved for the indication of lung cancer has surprised us. We are still convinced of the drug's effectiveness."

Erbitux, seen by Merck as a potential blockbuster with more than 1 billion euros in peak annual sales even without lung cancer revenue, is already approved for use in cancer of the bowel and of the head and neck.