This is really sad and sick.  The boy is only 2 years old and the stepfather confessed.  One has punctured his lung.  As the video states it is possible for one at a time to be inserted and within a couple days there would be no scaring so the needles went undetected until the boy had stomach pain and was throwing up.  What is sick is that the mistress told him to do this to get back at his wife?  Sick and hope they both are prosecuted if this is the case.  BD

A Brazilian toddler has been found with up to 40 needles inside him, which police say his stepfather deliberately inserted in a "black magic" ritual. 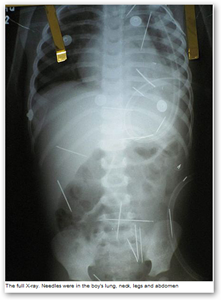 Police said Roberto Carlos Magalhaes has confessed to sticking the sewing needles into the two-year-old boy, who is in intensive care at a hospital.  Click on the image below for the BBC video. 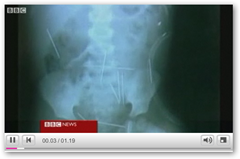 Mr Magalhaes said his mistress told him to ritually kill the child to take revenge on his wife.

Doctors will try to remove the needles, some 2in (5cm) long, from the boy.