You may have read about this in the news and wondered if Word was going away, nope.  Word will undergo some changes to abide by the ruling from

the patent violation of the lawsuit filed, so if you have purchased a copy of Office 2007 or Word 2007 on it’s own, you are fine.  You won’t be able to basically save your Word documents in the newer XML format, so DECX or DOCM are out of the question now.  Most folks that I have run across  though were still using the old “doc” format for compatibility reasons, so in essence I don’t think this is going to have a huge effect on many.  BD

Also, while I am on the subject of Office, if you are a student you can purchase the full on professional versions of Office for $59.95 with an “edu” email address or be enrolled on the list of education institutions listed with a minimum of .05 course credit.  Also, this is a good page to reference as you can also get a copy of Windows 7 Professional for $29.95, again for students who meet the criteria.

This is called the Ultimate Steal Deal.  BD 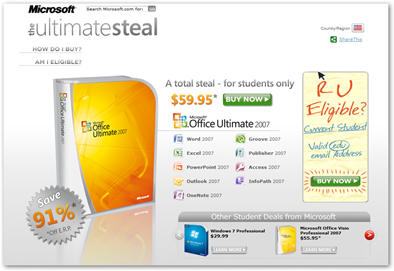 Microsoft has issued a patch for its Office 2007 product that brings the desktop suite into compliance with a court edict.

The ruling means Microsoft can't sell versions of Word that can open documents saved in the .XML, .DOCX, or .DOCM formats that contain custom XML. Those formats were at the heart of the patent dispute. DOCX is the default format for the most current version of Word, which is included in Microsoft Office 2007. Custom XML is used by businesses to link their corporate data to Word documents.

The patent, No. 5,787,449, describes how programs go about "manipulating a document's content and architecture separately."

The court left an out for Microsoft. The company can continue to sell Word 2007 after Jan. 11 if it removes the offending technology from the product. The patch appears to signal Microsoft's willingness to comply with the order.