This is a strange story, but from the story here the doctor had committed fraud with insurance billing, had his license revoked and disappeared while on vacation in Greece.  Boy this is a sad fate having to live at the end of a glacier in a tent after having 2 planes, a nice mansion, yachts and more. 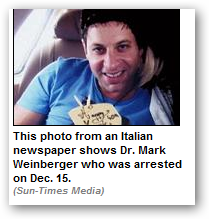 Crime doesn’t pay or not in this case it appears.

He was close to 6 million in debt when he disappeared.  It sounds like he was on the run and hiding under the radar for quite a while.  The FBI has been looking for him for quite a while as well.  He’s not that old either at 46.  BD

Two Italian newspapers have reported that a northwest Indiana "nose doctor" who disappeared in 2004 after allegedly bilking patients and Medicare out of millions of dollars was arrested Tuesday in Italy, the Post-Tribune is reporting.

Mark Weinberger, 46, of Merrillville, Ind., was in a hospital in Aosta with minor neck injuries after trying to commit suicide with a box cutter he had hidden in his rectum, the papers reported.

Italian authorities found Weinberger living in a tent at the base of a glacier at the foot of Mont Blanc, and suspected he was trying to flee to Switzerland, according to the newspapers Aosta Sera and Valle-d'Aosta.

An Italian journalist told the Post-Tribune that Weinberger had been positively identified through Interpol, the international police organization, but FBI Special Agent Wendy Osborne said the FBI has not yet received that information.

And in 2006, a federal grand jury indicted him on 22 counts of fraud for allegedly falsely billing private health insurance companies for endoscopic sinus surgeries he never performed. The fraudulent billing exceeded $300,000.  Weinberger's Merrillville business was reportedly taking in more than $3 million a year, which he spent on a lavish lifestyle that included private planes, yachts, a personal trainer and luxury homes in Northwest Indiana and Chicago. In 2005, a mortgage company initiated foreclosure on his $1.82 million mansion on West Delaware Place in Chicago.