I just posted about the 3 big companies in New York stating they “have to stand by” and pay their investors.  What kind of investors are they?  Greedy ones and what kind of insurance companies are these? 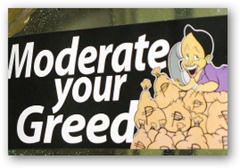 Just even a portion of the millions they claim they have to pay would take care of a multitude of pap smears and mammograms.  This also puts the American Cancer Society in a bad spot as well.  I keep saying there’s no way anyone is going to get their arms completely around projecting the cost of healthcare as technology raises the bar and cost every day, something we have to live with.  When you hear stories like this an then hear about the need for dividends, this really makes one big case for insurers to get off the stock market and return to being non-profits as its only going to grow worse as the algorithmic calculations continue to grow more complex they find new and innovative ways to create formulas to generate profits from areas that should be left alone.  BD

Once back to a non profit status, there goes the dividend problem.  BD

ALBANY, N.Y. – As the economy falters and more people go without health insurance, low-income women in at least 20 states are being turned away or put on long waiting lists for free cancer screenings, according to the American Cancer Society's Cancer Action Network.

New York used to screen women of all ages, but this year the budget crunch has forced them to focus on those considered at highest risk and exclude women under 50.

In the unofficial survey of programs for July 2008 through April 2009, the organization found that state budget strains are forcing some programs to reject people who would otherwise qualify for free mammograms and Pap smears. Just how many are turned away isn't known; in some cases, the women are screened through other programs or referred to different providers.

The Cancer Society has no way to count how many women are being turned away, and many providers don't keep track of how many are denied screening, or whether those women find another alternative. The cost of screening varies, but the average mammogram is about $100, while a Pap screen can range between $75 and $200, according to the society.

"It's pretty painful" to turn women away, said Shari House, owner of the Pearl Health Center in Portland.

"They get angry, they get depressed, they get hopeless," she said. "It's like having a door slammed in your face."

Poor being turned away from free cancer screenings - Yahoo! News