This should come as no surprise as we see it all over the web, advertising and explanations on how to select a plan.  It rolls over into the government even putting time and effort into a guide and websites too.   One example is the money that goes out for Pharmacy Benefit Managers, posted here yesterday.  The plans all come with one of these for the most part.  Check out and see the behind the scenes expenses and compensations. 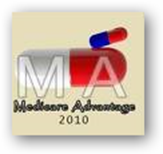 By not having the ability to negotiate directly the government puts out a ton of money with medications.  Would be nice if some of this overhead money went directly to paying healthcare claims, perhaps we could stand to enable a few more folks to get well.  BD

Health insurance companies that offer private alternative Medicare plans, called Medicare Advantage, put billions of dollars toward profits and marketing rather than patient care, according to a report released Wednesday by House Democrats.

Reuters: "From 2005 to 2008, Medicare Advantage insurers reported $27 billion in expenses unrelated to care, according to the report released by [the House Energy and Commerce Committee], which looked at 34 such insurers. It also pointed to millions spent on executive compensation and company retreats in Hawaii, Cancun, Mexico and other exotic locales."