As the economy gets tougher to deal with it appears even defibrillators are open game for resale.  In this case a man who needed money apparently stole them and pawned them at a second hand store.  The value of each was around 10-15k.  There were a few other medical devices found as well. 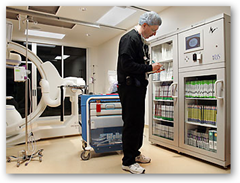 This certainly makes a case for some RFID tags to be put in place so expensive life saving items as such don’t find themselves walking out the doors of hospitals.  BD

Five defibrillators stolen from Columbus hospitals since November were recovered yesterday, and police expect to find other missing medical devices in the next several days.

The five stolen defibrillators were on sale at reTagit, a Grandview Heights secondhand store on Goodale Boulevard, said detective Brian Lacy of the Columbus police burglary squad. Someone who had seen them for sale and learned of the thefts called police yesterday morning.

The store owner did not know the items were stolen and has been cooperating in the investigation, Lacy said. The owner did not reply to a request for comment on this story.

Ohio Health, the parent company of Riverside and Grant, put the total value of its stolen items at around $200,000. OSU Medical Center valued its five stolen defibrillators at $10,000 to $15,000 each.