I think this is actually a very good thing.  In my running around and talking with drug representatives about how they use their tablets, I have yet to find one that can figure out that it’s good for taking notes and other uses outside just the compliance software loaded for distribution of samples.  The signature capture is king and all the inking can now be placed into data bases.  There has been software around for quite a while that will store text and inking in either an Access or SQL data base. 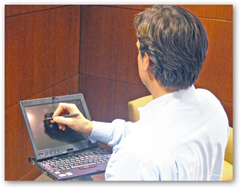 When I went to the big HIMMS convention in 2008 I used my tablet and One Note. I took a couple days to make “intelligence files” with the HIMMS listing on who I wanted to target (as I was promoting tablet pcs at the time) and went to it.  Yes I had those who looked at me like I was some kind of a “goober” for doing this, but you know what, it worked and with One Note I could query any of my notes or text and have instantly.  Even the folks who sold tablets didn’t know how to use them for their own efficiencies, they just sold them.  Here’s a developer, the Ablet Factory that wrote a simple EMR based on One Note, and he does a good job too.  I used to do training for Intel and would just have all the retail employees from Best Buy and other stores just sign in on the tablet. Tablets have a print driver whereby you can scan a sign in sheet right in there, so again no paper.  Even the HP rep had not figured that out a few years ago.  This poor guy in the picture here needs to figure out how to turn the screen around and make it flat and flush too (grin).  He’s working way too hard at this.

The Ablet Factory – New Release of One Note ...

Active Inking here in Orange County has software that rolls up the data too and has a kit to where you can take your favorite Word document and use it as a template to create forms to fill out on a tablet PC too.  For those areas you do not want converted to text, you leave it open to just take the inking, a signature for example.  I’m guessing this is some of what Pfizer is using with their new software on the Tablet PCs. They too created an EMR and one for physical therapy too, with inking.

If you want to read about how I did my work with a Tablet PC at HIMMS, check out the link below.  The folks at the Epic booth were impressed that day.  You can see my One Note file here relative to E-MDs, an EHR vendor and what I already had on file and was ready to write.

HIMMS 2008 Summary- Getting Organized is the Trick

Over at E-Clinical works you can see some of my writing here as I was collecting a name to follow up with, easy just write it.  Notice the tabs across the top too, all alphabetically in order and I had everyone’s booth number ahead of time too.

It’s not the device that is driving compliance here folks, it’s the software applications that Pfizer is using.  I wrote and EMR a number of years ago and it ran good on tablet too.

With the algorithmic formulas already programmed, the Tablet PC is smart enough to know what samples should and should not be provided to the physician, and the signature is captured.  We are back to the algorithms once again.

Maybe the reps will be smart enough to figure out how to use some free Windows dictation while they are at it, if the units have Vista or Windows 7.  This article says the tablets are for monitoring and controlling off label use but why not find out what else they can do to make the life of a drug rep a little easier with some other new ways of interacting with the tablet.  BD

Pfizer Inc. is equipping its sales representatives with new portable computers designed to improve their pitches to doctors—and at the same time help the drug maker comply with the law.

The New York-based company has been providing its thousands of sales reps with tablet PCs, a type of laptop computer whose screen can swivel and on which reps and doctors can write with a special pen.

Pfizer, maker of cholesterol drug Lipitor, believes the tablet PCs, which typically cost about $1,500, will help sales reps provide more thorough and up-to-date information about drugs to doctors, and in a timelier manner than printed materials.

Pfizer admitted to off-label promotion of Bextra and pledged to do better—and the tablet PCs will play a role. Pfizer in August entered into a "corporate integrity agreement" with the Office of Inspector General of the U.S. Department of Health and Human Services. One of the pact's provisions is that Pfizer must use its tablet-PC system to essentially monitor its sales reps.

Pfizer started planning for the tablet-PC system about 18 months ago, predating its agreement with the government, though the company is enhancing the system's controls for sample distribution because of the agreement, says David Kreutter, Pfizer's vice president of commercial operations.