Patients need donor but with the new process not all of the patient’s bone marrow is killed, just part by using radiation.  The new process 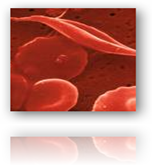 eliminates much of the chemotherapy and is targeted for children.  The regenerated bone marrow end up being a combination of both the donor and the patient.  The earlier it can be done, the potential less damage the disease can contribute to the patient’s organs.  BD

Nine of 10 adult patients given an experimental bone marrow transplant treatment were cured of sickle cell disease, researchers at the U.S. government's National Institutes of Health reported in the New England Journal of Medicine.

In conventional bone marrow transplants, doctors try to destroy all of a patient's own bone marrow. Using the new technique, adults are given a lower dose of radiation, only partially destroying the patient's bone marrow.

Tisdale and his team used about one quarter of the conventional dose of radiation, which was enough to wipe out part of the marrow. They also eliminated chemotherapy normally given to suppress the immune system.