This is not too far from where I live and as mentioned is prime real estate territory here.  I’m not in that general area though and far enough away, but I was surprised in reading the story as the tanks ruptured back in 1986, quite a number of years ago. 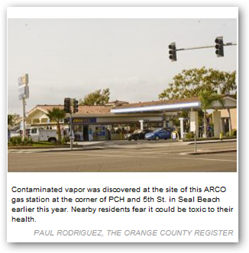 I have filled up there.

The cleaning began just this July, a while since the breaks at the gas station.

SEAL BEACH – The Orange County Health Care Agency will study whether there is a possible correlation between an old gas leak and certain types of cancer reported in the Bridgeport neighborhood, city officials said.

ARCO is looking to clean up contaminated soil vapors from a gas leak at the station on Pacific Coast Highway and 5th Street and the health-care agency is concerned about the possible link of benzene, a known carcinogen, to a type of leukemia.

Underground storage tanks at the station ruptured in 1986, and ARCO and the Orange County Health Care Agency have worked since then to clean up the site. ARCO in January discovered the station was expelling contaminated vapors and the company started cleaning the site in July, said company spokesman Tom Mueller.  Soil vapor contamination can make its way through cracks in the foundation and creep into the inside air, according to Mueller. The vapors are odorless and can be harmful to breathe.

ARCO has been using an extraction system at the station that has been successful so far, Mueller added.  If testing shows there is a health risk in the neighborhood, ARCO will pay for resident relocation, living expenses and property damage. The company will also compensate residents who sell their homes below appraised market value because of the contamination problem, Mueller said.