This is pretty interesting technology from what I am reading here as it appears we may have a new classification of Dermatology on the horizon, an

interventional dermatologist.  The reason I make this comment is due to the fact that while treating the skin it is also visible via the ultra sound at the time treatment is given, in other words the physician can see the layers of skin.

Guided Technology worked with Ethicon Endo-Surgery, a subsidiary of Johnson and Johnson to develop the technology, who invested millions into the project.

The product is delivering acoustic energy to the tissue and with imaging included the physician can see into and below the skin.  Along with the FDA approval, the company lists several first time events as cleared by the FDA and with the approval it has created a new technology category at the FDA.

“In the case of the products produced for the professional aesthetic market, there are several “firsts” as cleared by the United States Food and Drug Administration (FDA) on September 11, 2009:

The device does cost a few dollars though, around 89k I believe it was stated.  You can also watch a video here.  It is not slated to take the place of plastic surgery, but for those who do not need extensive reconstructive work, 30 minutes with the device might be an alterative to a surgical procedure.  BD

The device will be used initially for cosmetic purposes, but backers say the technology has the potential to treat tumors without invasive surgery. 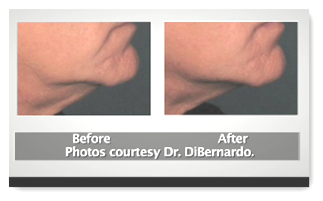 Ulthera has started to sell the device to plastic surgeons and dermatologists for procedures such as eyebrow lifts and facial tightening. The company has raised about $30 million, hired more than 20 employees and plans to double in size next year.

Guided Therapy has a second spinoff company, Xthetix, which is developing a handheld device for consumers that can be used to treat acne and rejuvenate skin.

Company representatives are encouraged by the FDA clearance, which they believe gives the firm an advantage over other firms developing ultrasound-based treatments.