The saving grace was the sale of two units but when you read through they have sold their labs out to Quest and have already cut 750 employees.  The 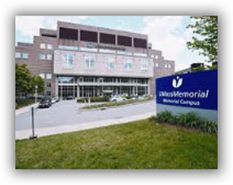 hospital is seeing fewer patients, has the 2% sequester cut going as well as increased “observation” admittances that are affecting income.  UMASS is a non profit.  The one time surplus income is just that, a one time boost that won’t be there next year.

Hospitals are all over the map as when you look at UPMC in Pennsylvania in a poor area making a billion a year in profit (aka excess revenue), you really wonder what is wrong with the distribution of money in healthcare.  Over in Connecticut you have some larger hospitals showing profits of $40 to $60 million and yet they have other smaller hospitals on life lines.  Steward hospitals in Massachusetts has not shown a profit yet and they are owned by a private equity firm.  Over in California, Riverside hospital is taking a vote to pay a consultant $22 million to help them get out of debt.  That’s a lot of money to pay to get out of debt.

This was the first loss in 8 years the hospital has posted and is the largest employer in the center of Massachusetts.  BD

WORCESTER — UMass Memorial Health Care will post a $57 million operating loss for the 2013 fiscal year, which hospital officials say will necessitate another round of layoffs, service reductions and cost cutting at the region's largest health care provider.
A UMass Memorial Medical Center memo sent to employees today reported that the nonprofit hospital system will record its first operating loss in eight years for the 12-month period that ended Sept. 30.

However, UMMHC will post an approximate $75 million surplus, when investment income and revenue from the sale of two units is accounted for, according to hospital spokesman Robert Brogna.

In fiscal 2013, the hospital group sold its clinical outreach labs to Quest Diagnostics Inc., and its home health and hospice program to the VNA Care Network and Hospice. UMMHC shed about 750 employees in those two transactions.
UMass Memorial president Patrick C. Muldoon wrote in his memo, "We've been talking about this for years — our leaders have been warning us about growing costs, falling patient volumes, the impact of health care reforms and our slow response to our changes. But the size of this loss and the speed at which it is affecting us is truly unmatched."