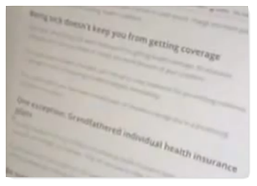 and not “bare bones” types of policies as we are finding out have been sold all over the US as they were “affordable” and are a step up for sure than not having insurance.  The one big item that has helped in some ways and hurt in other ways is the pre-existing condition clause.  It has helped as consumers can’t be denied coverage but on the other hand it has caused major havoc with risk pools and what the cost of a policy will be.

Obviously this is not going to go away any time soon and needs some answers and solutions, that is if we can see our way through working with the very complex math models used by insurers as “they” calculate the premiums to be paid.  Insurers are hiring Quants almost like they are going out of style to see what they can do with “new models” but just like the Quants who work at hedge funds are finding out, this too is a challenge and the models are getting harder to create, ones that are accurate that is.  Everyone needs a business model, math or otherwise to run their business.  If you scroll down to the footer and watch the Quants documentary below you will see how some of the original quants in the finance business have a warning for all about models and the #1 Quant in the world, Paul Wilmott talks about how “there is no science” at times and “they just guess and say something like “we will just use six”..

It’s also getting difficult to make decisions based on such models as you can’t figure out who’s in network and who’s not and even the insurers are messing up in telling you who is and who is not.

So here’s where it all clashes with the Affordable Care Act provisions butting heads with insurance business intelligence models.  Perhaps at some point this will mean a smaller profit for insurers?  BD

— A woman battling kidney cancer is losing her health insurance because her company’s health plan is being canceled due to Obamacare.

Debra Fishericks, who has been working for the past 10 years at Atkinson Realty in Virginia Beach, has been scouring HealthCare.gov for a plan that fits her, but is finding that current premiums and plans are out of her price range.

“On June 30, 2014, I will probably not be offering company insurance for my employees. I just can’t afford it,” Atkinson told CBS News.

President Barack Obama recently apologized for the disastrous HealthCare.gov rollout and the cancellations of millions of health care policies. Obama has called on states to allow Americans to continue to keep their canceled health care plans. Some states have declined