Well I much rather listen to the President than the folks over at HHS right now:)  This is a good move and he talks of how the plans had failed and what the attempt was to find the 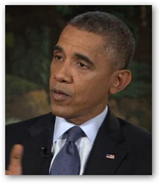 least disruptive plan to revise healthcare.  He also states everyone is acting at times like it was working fine in the US which it is not.  This is the full interview and at the end other items are discussed but most of it is healthcare. Basically here’s the issue and it’s all about math business models and the government having to play defensive and the lack of data sleuths and quants on their side so they can keep up with the other side.

Funny, he says Sebelius doesn’t write code but she’s doesn’t need to but rather start liking technology for one and be a role model which has never existed at HHS or the ONC, it’s been more like “its for those guys over there”.   You can see the fear and the dislike comes across very strong with Sebelius, and on the other hand how could one get approved to replace her, that would be another task but after this more folks will and do take her with a lot less respect.

Here’s some of my recent posts on the website which has been a disaster.  A lot of good questions here and what is the future.

And why are they writing all this code from the bottom up?  Both Oracle and Microsoft had turnkey state software exchange platforms available but government is hesitant at times to use off the shelf already integrated solutions as the contractors can’t make as much money.

And the CMS CIO has had it and is quitting and you can’t blame him.  I’m sure he had some other ideas but the dumb politicians got in the way.  It’s not magic that makes the website work.  I told my readers back on September 11th to count on manual methodologies, easy to figure out once the the last minute contingency contracts were awarded in June of this year.  BD