This is one bizarre story and you can watch the video and there’s a lot of information it seems we have not seen yet.  Why would the hospital basically kidnap the teenager?  The girl 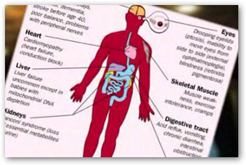 was under treatment for one genetic disorder diagnosis and then when she was taken to Boston Children’s Hospital, another diagnosis was given, one of a type of mental illness that would be causing her pain.

Mitochondrial disease was the genetic disorder she had been diagnosed with.

We are talking 2 very different types of problems one being genetic and the other psychological.  Why would the parents not question this after putting their daughter through treatment for the first diagnosis?  It’s a big change going from genetic to psychological.  If you read the diagnosis it relates to sexual abuse as being part of the reason for the likeliness for Somatoform pain so maybe that’s why protective services jumped on this one.  When tests can’t find the source of pain then this is where the diagnosis comes in.  The girl had undergone surgical procedures for her “genetic” diagnosis and we don’t what the procedures were.

At any rate, this is very strange and more information needs to come forward I think to explain what has occurred here. It took 4 days for the hospital to gain custody of the girl.   BD

It has been a bitter custody battle, and nine months after it started, it’s still going on.

In December 2012, Justina Pelletier was an active 15-year-old girl who would go ice skating, laughed and spent time with her family.

But just two months later, her family says their nightmare began.
“[Exhales] It’s beyond any wildest nightmare that you could think of,” 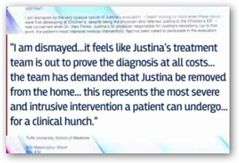 Her longtime West Hartford psychologist has also been following the case.

“It’s the most bizarre situation … I’ve ever been involved with,” says Dean Hokanson, the clinical psychologist who has worked with Justina the past five years.

Justina was diagnosed with mitochondrial disease a few years ago. It’s a genetic disorder that can cause loss of muscle coordination and weakness.

Despite that diagnosis she lived a normal life.

But last February, she also got the flu and was admitted to Boston Children’s Hospital to see her specialist.

They said Justina had “somatoform disorder.”

In short, they were saying she suffered from a mental illness, not mitochondrial disease.

Her parents, Lou and Linda Pelletier, were escorted out of the hospital by security, and within four days, they lost custody of Justina.

In addition to working with Justina, Dean Hokanson also testified at one of the court proceedings.

But the family showed Fox CT proof that every procedure and prescription was sanctioned by doctors, including Tufts Medical Center specialist Dr. Mark Korson.