I think the last blog post I made on this topic goes back to February of this year, link below that 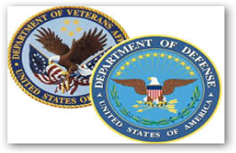 references a 5 Year $91 Million dollar contract so I am guessing that disappeared too?

In addition I believe this office had some with the VLER, Lifetime Virtual Electronic Record Program and right now with all the ups and downs and announcements, it s hard to pinpoint what office is over seeing that portion.  The VLER program as far as connecting with hospitals is still alive and well as I understand it, but just not part of the integration between the VA and DOD.  The VA page with all the VLER information can be found here.

We all probably can remember the long efforts out there to bring ALTHA (the DOD EMR) and VA VistA together, but the DOD has a lot of things going on outside the realm of the VA with some of what they do with active military deployment medical care in the field.  Anyway, now that the cost is out there for this complex IT infrastructure integration, well offices are vanishing that were originally established to head up the efforts.  It would be one heck of a lot of code…and just having the Healthcare.Gov site is a huge learning lesson for all, both government and consumers about the time and money involved with today’s complexities.  Here’s a relative link on that topic below.

In addition when it comes to medical records with the VA, there’s a subsidiary of United Healthcare called LHI that is also adding medical record information to the VA charts, so they are making money here and solicit private practice doctors to join and learn “their” portal to enter information that eventually goes into the VA medical records chart via manual input methodology.  This is in addition to the services United provides for the West US Tri-Care Contract.

Are we going to see integration provided via a technology subsidiary 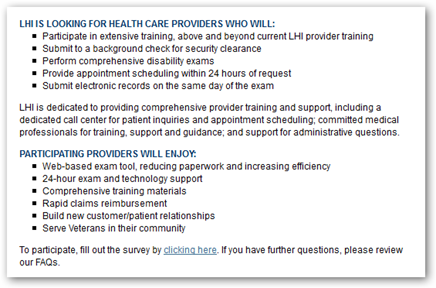 of United Healthcare one could ask to work with the LHI services division?  They do clinical Readiness exams to include dental, immunization and lab services as well as Case Management for the DOD, so again one might say with having a subsidiary that is in the clinical process here of creating records, what would be the next step of business for the corporation to pursue?  Federal Government clients listed here and what they do. BD

After launching with much fanfare in 2009, the interagency program office charged with developing an integrated electronic health record for the Defense and Veterans Affairs departments all but sputtered to a halt in September, Nextgov has learned.

The development followed a decision by Defense and VA in February to independently develop their own EHRs, due to the high cost of the joint system, pegged at $28 billion by Frank Kendall, Defense undersecretary for acquisition, technology and logistics.