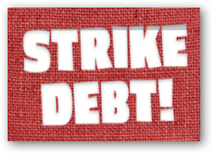 a book not too long ago addressing alternative banking as well.  You can read it and download that pdf document at the link below.  It is fairly quick reading and has a lot of good content and ideas.

What a great move to purchase and help eliminate debt for individuals.  We all know the healthcare system is broken, and right now there’s not a ton of hope as politics and technology are making it worse to implement.  This group is called the “Strike Debt” part of the Occupy movement.

“Strike Debt is a nationwide movement of debt resistors fighting for economic justice and democratic freedom.”

“Debt is a tie that binds the 99%. With stagnant wages, systemic unemployment, and public service cuts, we are forced to go into debt for the basic things in life — and thus surrender our futures to the banks. Debt is major source of profit and power for Wall Street that works to keep us isolated, ashamed, and afraid. Using direct action, research, education, and the arts, we are coming together to challenge this illegitimate system while imagining and creating alternatives. We want an economy in which our debts are to our friends, families, and communities — and not to the 1%.”

Over 2600 people have been relieved of their medical debt and I’m sure this may have helped some avoid bankruptcy.  What a nice surprise for those who have had their bought as the committee only gets an address and does not work directly with consumers in debt, instead they get a wonderful letter telling them their debt has been cancelled.  They hope to begin targeting student loan debt as well.  BD

An Occupy Wall Street spin-off group has bought up $14.7 million worth of Americans' personal medical debt and forgiven it over the last year as part of its Rolling Jubilee project, the group announced Monday.

The Rolling Jubilee project, organized by Occupy Wall Street's Strike Debt group, has so far spent $400,000 to buy the debt, in the process relieving 2,693 people of the money they owed for medical services Occupy thinks should be free.

The project, which launched on Nov. 15, 2012, raises money through small, individual contributions, and then uses that money to purchase distressed and defaulted debt from the lenders, who in this case are hospitals or medical groups.