Alliance is under the supervision of the California Department of Managed Care, we have two agencies here in the state with the other Insurance Commission 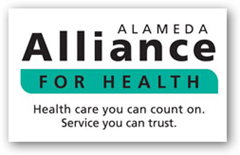 regulating insurance outside of the HMO realm.  Some people have already signed up and will have to make other choices unless they enrolled with Medi-Cal, California name for Medicaid.

Covered California notified Alameda Alliance in the middle of October that a state issued license was needed to sell on the exchanges but Alliance could not meet the deadlines to sell on the exchange with commercial insurance.  Most of the current Alliance members are on Medicaid so it doesn’t seem like this will impact a larger number of people.  They had hoped to increase the another 45k eligible Medi-Cal members.  Sutter Hospitals also has their own insurance plan and was going to be on the exchanges but changed their minds a couple months before the opening. You can see who’s that running show and where the CEO came from.  BD

OAKLAND -- Alameda County residents shopping for health insurance on the state's new exchange will have one less option: The state on Friday removed the not-for-profit Alameda Alliance For Health from its list of providers because it failed to meet the requirements to sell insurance on the commercial market.

The late change could send uninsured Alameda County residents scrambling to sign up with other providers before the Dec. 15 deadline to start receiving health care at the beginning of the year.

Alliance will continue to provide health coverage for more than 160,000 members, mostly on Medi-Cal, but the state said it wasn't ready to compete for more business on the exchange.

Figures weren't available on how many people had already used the exchange to sign up with Alameda Alliance For Health, a public, not-for-profit managed care health plan, since open enrollment began Oct. 1 -- one of the major initiatives under President Barack Obama's new health care law.

But those who chose Alliance still have time to select from a mix of plans from Anthem, Blue Shield and Kaiser Permanente, with service at a total of nine hospitals in the region.