Home » Insurance » Medically Related » My Commentaries » Other Items of Interest » President Obama Extends Current Insurance Policies For A Year With Stipulations As Goes With The Continuous Rise and Fall of The Machines In Healthcare Just Like The Markets…And How Will Insurers Implement This Model? 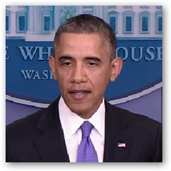 This is good news and gives people more time and you do have to look at the models used by insurers as that’s what they use to create polices  and all their business intelligence they use. It was their choice in the way that they decided to notify consumers and again “their math models” that quoted a comparable policy and so on.  As the President said we can’t go back and think we had a good system before because we did not.  Take a look at how the insurance business has changed as well as if you look at United for example 1/3 of their revenue is not policy related and that segment is growing as 2/3 of their business is still insurance related.  This is the real world today with computers…and government ends up behind the 8 ball all the time as insurers can change their models by the minute and I think they do sometimes.  You can look at the MDs that take care of Medicare Advantage patients being fired…again is is “cost algorithms says”…

Further addressed is that the individual market which is only 5% of the entire insurance market and keep that number in your head when you look at where the insurers are generating their money from so again for that 5% with the methodologies currently being used by insurers…well pretty shame on them if you will.  It’s their business models created by the armies of Quants that create their risk assessment math models and roll all the algorithms out on the servers they have running 24/7 that calculate.  If you don’t understand what Quants do and how insurers formulate this, watch the Quants of Wall Street as that’s where the big use Quant employees originated and now it’s shuffling down to the insurance business in a big way, just look at the classifieds.  The video is also in the footer of this blog with a few other educational videos that explain how all of this works today.

Health Insurers Not Too Worried About Obamacare

In essence the President has allowed more time for folks to find replacements for a lot of the bare bones policies which I wrote about last month as this is what Obamacare was built to replace and make sure consumers have “real” coverage.  So not a bad thing in concept; however the way this has all played out with connecting the math models used by insurers certainly turned political. Is was “their” choices and options on how each company wanted to handle this and they made a stink.

In addition the President has added that the “insurer methodologies” now must abide by some rules and again if the insurers had not been a politically motivated on this 5% of the entire industry things could have been different.  The White House did not send the letters out, insurers did.  Also think of hospitals that would rather see a full insured patient as well so there’s that angle of this as well.

Now consumers will be notified explicitly that the policy is only good for a year and encourage them to look at the alternatives in the markets.  It’s a shame the insurance industry took some of the roads they did but all did not do that but a lot big ones did.  CEOs of insurers should break away from their “branding” focuses and take a look at how the insurance business is ran, what the perception is.

This was a good move today as again the insurance company business models and methodologies left almost no other choice.  Again remember the insurers modeled everything they did.  We are really now getting closer to needed digital laws to where the IT Infrastructure is connected from the start.  A couple of tools that would help this would be one, give Congress a better took to design laws with with greater query power…I have been suggesting this for a couple years now, get an IBM Watson in place which uses speech recognition so even the lowest common denominator who needs to rely on speech recognition can participate.

Number Two, get some help for Congress with technology and restore

the Office of Technology Assessment as they need that tool as well and Congressional hearings will improve and make better headway.

Funny, the President says to the reporters… “I’ll let you guys figure out how you want to translate this”..that was funny but right on the head as all reporters  will put a political  spin on it.  President is really working hard to explain why reform was needed and he’s right.  He has some backwoods agency heads around that are issues but on the top I think he’s got it together.  You could really tell he’s a bit tired of the “crappy” stuff out there with the political perceptions.

Addressing the website again…over and over and over…can’t journalists get it through their head that you cannot commit a “concrete” date for when all will be up and running?  As I have said before you probably have a couple sets of engineers working on the site, one to write code to keep the current system gimping along as it is not stable and a second set with a few sandboxes re-engineering modules that don’t work like a possible WebLogic Oracle server instead with apps, works better and more code written than open source right now.  Why do you think California did better, they didn’t write code from the bottom up and used a lot of Oracle off the shelf technologies…you do what you have to do with making smart decisions and don’t sit around and write a lot of custom code when you have alternatives.

I listened yesterday to the Oversight Committee and it was good as there was some learning going on there from both sides and sure some heated questions but also there were some very tech savvy Congressmen that we never hear from as the “whack jobs” get all the press it seems.  I also have read the 175 pages Issa had and that gives a ton of insight to anyone who knows code and some engineering of networks.  Did for me as I could see the day by day glitches and the complexities and where some off the shelf modules could have eliminated some of the issues.

out of network when they actually were not..it’s their math models and algorithms..flawed..as I said…the letter sending algorithm here.

I like to call that Algo Duping and the Attack of the Killer Algorithms (great videos at this page to help educate you) because that’s what it is..reality..on servers 24/7 and nothing changes until the code gets changed so keep that in mind when you hear politicians talking today and more digital illiterate they are, the greater number of nonsense speeches and issues we tend to see, so back to that link above for Congress, get that Office of Technology Assessment tool to help all of them out.

So in summary the insurers have another year to deal with their methodologies with consumers and see what they do. Blame game comes back to math models and how they implement, same stuff that goes on with medical record for that matter.  This is good with what the President did today so hang in and see what type of model and methodology is thrown at your from the insurers this time as it’s back in their court once again.  Don’t be a fool as the bare bones policies were created by insurers and they need to un-create as well and handle the changes with the law in a professional manner, unlike what we have seen the last few weeks.  The objectives of Obamacare are good but again the side show politics and the OMG attachment perceptions to math models used make it even harder.  BD