This makes a case again for the careful selection of technologies use for massive projects like this.   When you read about the group of open source and proprietary companies used and the amount of code that needs to be written between all of them, it’s a lot.  You have Red Hat Linux in there as the operating system that has apps, (Oracle has their own in house version of Red Hat Linux already integrated and provides support) a MarkLogic XML data base/search agent, Oracle Access and 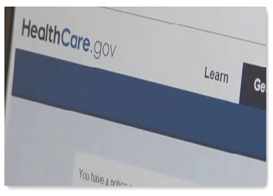 ID Manager, just to name a few.  Sure there’s a lot to be said for using open source but when you have fast ticking clock like CMS did, you know what, go out and pay for the integrated code and data base that is already tweaked to work with other components.  You can read all over the web about enterprise accounts and their satisfaction with the Oracle Linux data base products by comparison.  They pay for and get good support, straight out and with Red Hat not the case when it comes to support.

Again, when the clock is ticking and there’s code already written to integrate the Oracle components already in use…well what do you think?  In addition, the MarkLogic data base uses an XML based search and match, go over to Oracle and we have Java.  Java is still king no matter what anyone else says…and even at Open World the CEO of MarkLogic made a comment that their data base when you are using a lot of Oracle apps may not be the best choice, but the company is growing and who knows could be bought by Oracle some day, but again case in point here is that sometimes it’s not the right time to be pioneer with some projects, like this one.  There are a lot of companies doing fine with MarkLogic but not under the the time crunch for performance.  Not making a commercial for Oracle here but rather talking common sense.

Data gets mis-matched out there all the time.  About a year ago I sold my house and over 6 months later I get my standard form to look over and see if my car insurance information was accurate.  Well mine was not and I knew it was a “bad” address match off public records.  How did I know that?  Again this  months after I sold my house and moved and the new owners of my house were listed as “secondary drivers”..and I have “never” had secondary drivers on my policy and have had the same carrier for auto insurance for about 30 years…so nothing new to even stir up the data pot, just their bad data mining algorithms…

So when you watch the video here you will see a mis-match…and unfortunately it was exposed over the web, and this happens.  People with mis-matched credit information

spend years trying to get data mismatches fixed and the folks inquiring about you get to see the mistakes and take them for being accurate while you don’t.  Watch this segment at the link below on what 60 minutes found as it is a direct correlation to what is occurring here.  If the Oracle Access and ID manager is not configured to integrate in certain fashions with all the other components they tossed in, this what you get.  Again it’s not the first time this has happened and companies successfully use the Oracle Access and ID Manager all the time with no issues..it’s all in the configurations and engineering. In this case it’s bad engineering but when you look at the 60 Minute story you will see how the data selling epidemic even makes all of this worse and corporations, insurance companies  and banks are profiting in the billions with selling data.

Obamacare in ore ways than one is “all about the machines” and how the code comes together.  Sometimes certain technologies are not advanced integration wise to join the big pools on the internet and we end up with raging code and battling algorithms.  That’s what’s running everything.

Lucky enough for honest people here the attorney gets a call from someone else who could see all his information…I’m sure there’s a potential lawsuit in the making here.  There’s no procedure to handle breaches like this, but kind of ironic that this same agency makes the rules for those who do not have adequate security in place..pot and the kettle here it seems.  This is exactly the stuff I was afraid of back in 2009 when I said please don’t nominate Sebelius as Health IT is going to eat her up, and it has and I think personally from what I have seen lately in the news, she’s seems to have some odd self perceptions and can’t see what technology people see and listen to what she says and how she reacts..she doesn’t like technology at all, even though she says she does, she doesn’t as Health IT  frustrates her as she can’t control it and doesn’t understand it and for that matter DOJ didn’t either, read the link.

So I do hope Issa gets us some answers on all of this with what technologies were in fact used and where and how.  Shoot when you have a project this big and need functionality fast, it’s no time to go fiddling around and building it bottom up with open source, any engineer will tell you that.  How much was written in India, the country of domicile for QSSI on the SEC

pages of United Healthcare?  There really seems to be no doubt about the engineering of the site and the web services here and that’s exactly what you get when you have novices engineering a project like this…they have no clue about time, work and and how difficult it is and novices get duped and duped again.  Check out the Algo Duping page for some good videos on how this happens today…become a skeptic when you need to be.  BD

About a month ago, attorney Tom Dougall logged on to healthcare.gov to browse for cheaper insurance for him and his wife.

On Friday, the last thing he expected to hear on his voicemail was a man from North Carolina who says he can access all of Tom's personal information.

Dougall says he thought it was a scam until he realized his privacy had been breached.

"I believe somehow the ACA, the Healthcare website has sent me your information, is what it looks like," said Justin, a North Carolina man who could access Tom's information on healthcare.gov. "I think there's a problem with the wrong information getting to the wrong people."

At first, Dougall didn't know what to think.

"We received a phone call from a gentleman named Justin in North Carolina who informed me that he had gone on the healthcare.gov website and when he logged in under his log in and password, he received a document of all of my and my wife's personal information," Dougall said.