Nothing like sharing the love, right?  Simon Stevens has been working at United since 2004 in the US and is originally from the UK.  This almost sounds like one of those McKinsey Consulting deal where companies and entities pay a lot of money for a “groomed” CEO.  I read in the book review 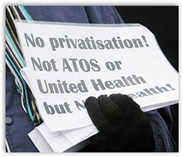 “The Firm: The Story of McKinsey and Its Secret Influence on American Business,” that there is in fact a lot of this going on in business and the author did a couple videos to promote.  Of course McKinsey is not alone as you have Bain that kind of does the same thing and some companies pay McKinsey millions so CEOs can have a mentor and friend.  Anyway, you just kind of wonder what influences were here with the NHS choosing an executive from United.

He is also a former member of former Prime Minister Tony Blair’s cabinet.  I am guessing I’ll have a few comments here from the UK:)  April 1st is the day he takes over the NHS.  I’m a little late getting this out as the announcement was made a few days ago.  I’m sure all the analytics and software will follow along in time and who knows who else might venture over to the UK.  Back in April of 2011 it was announced that United pulled out of the primary care business in the UK, so is this a new model?

“Instead, it plans to expand its commissioning support in areas such as data analytics, demand management and medicines management. It is already working with a number of PCTs and GP consortia, including pathfinders in Hounslow who recently signed a deal with the firm to run a major crackdown on GP referrals.”

The article says a “world wide” search was enacted to find Mr. Stevens…so again..a consulting firm here?  The NHS will have more than enough analytics coming out their ears if the United model of crunching data and using cost algorithms is followed as it is in the US…here’s one example with Medicare Advantage doctors being fired…with no human contact or explanation…BD

The 47-year-old Stevens has been a charismatic and intellectual force at Minnetonka-based UnitedHealth, the nation’s largest insurer, where he has worked

since 2004. He currently leads the global health division as well as the company’s Washington-based think tank that focuses on research and innovation to modernize the U.S. health care system.

Born in Birmingham and educated at Oxford, Stevens had been a member of former Prime Minister Tony Blair’s cabinet for four years before coming to UnitedHealth. In all, he spent about a decade in various positions with the National Health Service.

Stevens will take over as the chief executive of NHS England on April 1, according to a government statement announcing his selection.