Algorithms Doing Battle With Other Business Intelligence Algorithms….One Algo Executes And You’re Off the Map

Sounds like I’m talking about Wall Street doesn’t it?  Not this time but there are a ton of similarities as you see it’s the same players that exist in the financial field.

Stock market has tons of algorithms that are programmed to seek out other algorithms and react with them in one fashion or another and Obamacare, well it’s also a battle of the algorithms.  Healthcare just doesn’t have that extra element of “need for speed” like they do on Wall Street as a split second won’t make a difference on what policy you get; however the clashing busy little algorithms are calculating what a replacement policy will be if you need to get a new one.  If you have employer insurance, they have algorithms too that are constantly at work.  No matter what kind of exchange you have today, they all have glitches and algorithms that don’t like each other too.

Just today in California, one exchange carrier has to be removed by the state as their algorithms with proving solvency were not sufficient.

So are you one of those who is in the process of having to replace your health insurance policy?  Well the math business models of insurers have designed it that way for their profitability.  Insurers have been deleting policies and adding new ones for years, way before

Obamacare was created.  It happened to me around 10 years ago, so this is not new, but what is new is the intense business analytics on steroids that insurance companies use, the math models and yes they are in fact just like the ones on the financial markets run by Wall Street and banks.  Nobody I don’t believe expected it to play out this big but “algorithms said”…business math models and executing algorithms run the processes as programmed…

The ACA minimum benefits were set up to also deal with the “under insured” (and remove some insurer algorithms)as identified by the government and there were about 10 or so rules and stipulations to be met so those insured had a “real” policy without huge deductibles with basic preventive care needs met. Sad thing is we are finding out how many “bare bones” policies were probably sold out there that can’t conform.  Some may not be all “bare bones” but fail to meet maybe one or two areas.  Hospitals don’t want to see the “under insured” show up either if it can be avoided as what is not covered now becomes a payment and collection issue between the patient and the hospital.  There have been enough of those stories in the news to go around too, some where patients are charged full book prices that may be double of what an insurer would pay them.  Still see them but many hospitals are now doing a better job working with the non or under insured patients on charges.  Some are getting huge price increases quoted and again what “algorithms” are the insurers using to calculate? 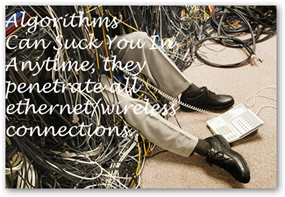 out of network, it gets more challenging and again this has been going on for a while and not new as insurer contracts with doctors and hospitals change all the time.  At the link below I have several examples to where insurers notified patients and doctors in error that they were no longer in network and had to retract notices right and left, “bad algorithm letters” in this case.

Are you getting the point here yet, the Obamacare is a big mess of segmented algorithms and it’s not just the markets where the Algos play?  The process has been around for quite a while but the algorithms multiply like rabbits when companies are looking at numbers on spreadsheets to squeeze out and find more potential profit, the parameters just get tougher to meet.  That happens whether or not the real world is doing well or not doing well and when it’s the case of the latter, you notice it as it means some type of access is now out of reach.

not have happened without some of the financial pinches out there today.  You can have some potential conflicts when you have one arm or subsidiary of an insurer remove some access, lower reimbursement, etc. or even form an ACO and then have one of the insurer’s other subsidiaries who sells software rush in for a sale as a company will need some kind of tools to keep up with the insurance algorithms and methodologies they use.

Some people are having to change who were on Medicare Advantage plans…Algorithms says…even though CMS surprisingly gave the insurers who run the advantage plans a 3.3% increase for next year.  The doctors who were fired received no explanation and some has just signed a new contract with United in August…but again the math and spreadsheets say we don’t make money here so …a goodbye algorithm kicked out the letters.  We are seeing more and more of those “corporate algorithm balls” to where notification is done by computer, sometimes out the blue to where no face to face human explanation is even offered and there’s no forewarning.

s in Connecticut, Florida and Rhode Island-Attack of the Business Intelligence Killer Algorithms…

Hospitals are having to deal with the 2% Sequester Algorithm…that math that pays them 2% less until Congress gets their act together.  As patients we get the losing end again as hospitals layoffs become more frequent and we all know what shortages of help cause these days.

One Good Reason to Fix the Sequester as Hospitals and Providers Are Ready to File Lawsuits Against Insurers Passing Back 2% Sequester Cut-HHS and CMS Have Some Real “Perception” Issues And Can’t Model Worth A Darn..

Last but not least we have the algorithms on the insurance exchange website that suck right now, they are sick algorithms and even when they are well, their illnesses might hang on for a while, so you got it the exchange sites are big clusters of algorithms…and that’s what you are fighting on the sites with either registering or trying to buy a policy.  In addition,

Some algorithms have teeth and want to take things away from other algorithms…some algorithms can’t fight back no matter how hard we try to reprogram them (grin).  So we are under the Attack of the Obamacare website algorithms right now and they will be tamed in time.  Below is a link on every day occurrences where the algorithms come out and bite and the strength of their bite is determined by humans and how they program them…what they allow and not allow…

Attack of the Killer Algorithms! Digest & Links for All Chapters–Read About Math and Crafty Formulas Running on Servers 24/7 Making Life Impacting Decisions About You– Updated

Long and short of all of this is that we are all under the influence of computer code that runs 24/7 on servers and as the image says above, they eat algorithms so remember nothing a politician says has any meat until those algorithms (computer code) is changed.

Obamacare, is all about the fighting, sick, spastic, and greedy corporate algorithms out there, it’s automated math and we are stuck with it, no going back, but do be a skeptic when you need to be when you think the algorithms are wrong…they just might be with the steady accumulation of “flawed data” everywhere today.

If you want to learn more about the math models used by banks and insurers, hop on over to the Algo Duping page and there are some great videos done by people smarter than me that address a lot of this at the layman level.  BD