Home » Medically Related » My Commentaries » Technology » Bill Gates: The Internet Is Not Going To Save The World, As A Priority It’s A Joke, But Eradicating Disease Might..

Here’s a couple of short paragraphs below from the long interview at the Financial Times below..and he doesn’t see himself in the same mirror at the younger billionaires.  I am sure with what he sees going on out there today compared to his dream of making a world a better place and seeing how people are gaming it and getting wealthy with mathematical 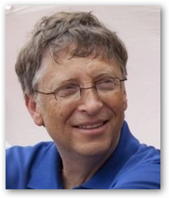 formulas, this is not what he envisioned.  We do have a pretty crappy world out there with banks and insurance companies using massive amounts of segmentation skills to model poverty and inequality.  Scroll down and watch the videos in the footer for more on that topic.

He didn’t imagine a world of data selling like we have today going on that denies access instead of providing better lifestyles.  Gates says he likes the IT thing but if you want to improve lives then you have to deal with basic things, like child survival and nutrition.  He questions Zuckerberg’s philanthropy methodologies with Facebook and hopes his words reach all of Silicon Valley.  In what I cover here at the blog I have to say the same thing that yes with hospitals and doctors technology helps but way too many have slid over to the other side of analytics and are so sucked in and the errors developing are phenomenal.  We do have a pretty stupid society that thinks an algorithm can save everything and our HHS secretary is certainly duped beyond imagination with how she runs her agency and shows us some way off base personal perceptions of herself.   BD

“There is no getting round the fact, however, that Gates often sounds at odds with the new generation of billionaire technocrats. He was the first to imagine that computing could seep into everyday life, with the Microsoft mission to put a PC on every desk and in every home. But while others talk up the world-changing power of the internet, he is under no illusions that it will do much to improve the lives of the world’s poorest.

“Innovation is a good thing. The human condition – put aside bioterrorism and a few footnotes – is improving because of innovation,” he says. But while ­“technology’s amazing, it doesn’t get down to the people most in need in anything near the timeframe we should want it to”.”

When Mark Zuckerberg unveiled his intention to provide Internet to the two-thirds of the world without online access, he asked, "Is Connectivity a Human Right?" On Friday, Bill Gates strongly criticized the idea of the Internet as a world savior. "As a priority? It’s a joke," he said in an interview with the Financial Times on Friday.

That's not a new line of criticism, but Gates is now the most prominent tech star to join that chorus. Back in May, one unnamed entrepreneur told The New Yorker, "They actually think that Facebook is going to be the panacea for many of the world’s problems. It isn’t cynicism—it’s arrogance and ignorance." But an unnamed Silicon Valley person pales in comparison to the behemoth of Bill Gates, who echoed that sentiment. "Take this malaria vaccine, [this] weird thing that I’m thinking of," Gates sarcastically told Financial Times. "Hmm, which is more important, connectivity or malaria vaccine? If you think connectivity is the key thing, that’s great. I don’t." Don't take that as throwing shade on technology, though, as its more directed at the misguided tech philanthropy: