This is the brand new, state of the art facility that opened earlier this year.  The hospital has 600 beds and when in the planning stage many had 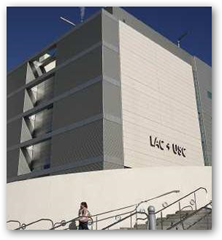 argued for 750, but 600 was the number decided  upon.  Some patients are waiting as long as 23 hours to be seen, although average times are ranging from 3 to 16 hours.   Fears of the H1N1 virus are also having an impact on the over crowding.

Patients are also being diverted to other private hospitals who take Medi-Cal.  One recently used is Downey Community which is in the stage of re-structuring after filing bankruptcy so that ER room is currently not on the list for referrals.  In case H1N1 cases pick up in a hurry, the hospital is ready to go with tents.

The hospital also has some mobile units as we saw with RAM Remote area medical care with mobile dentists who setup to help out.

I did a post a while back about all the new state of the art equipment, robots and more at the link below before the hospital opened.  They have robots and all the latest diagnostic equipment available too at bedside.  BD

The crowd waiting for emergency room beds at County-USC often swells to 100, with some people waiting up to 24 hours, Supervisor

Recent county reports show that 30% to 40% of the time the hospital is operating at “severely” and “dangerously” overcrowded levels.

County-USC already contracts with St. Vincent Medical Center in Los Angeles and several other private hospitals that honor Medi-Cal, and is negotiating contracts so it can transfer patients to more hospitals, according to Carol Meyer, chief network officer of the Los Angeles County Department of Health Services.