Yes, we are getting the bum’s rap all the way around, higher insurance premiums, possibly skipping prescriptions and depending on the occupation, 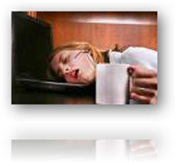 more exposure to viruses and other ailments.  We are caregivers, and we do get very tired.

Money management is the other part quoted in this article as women for some reason or another in a family situation get strapped with that too, not all of course, but many.  I don’t know about you, but I sure feel some of this.  In the insurance end of things just being female appears to be a “pre-existing” condition, by the time they crunch and run all the algorithms for risk management assessment, we can’t ever come out ahead of that game because even worse then men, we don’t scale (data talk).  BD

Taking on a greater share of the earning duties, with little dropoff in home obligations, is having a pronounced effect on women’s health in the United States, according to a new national report produced by California first lady Maria Shriver and the Center for American Progress.

The health segment of the sprawling report (titled “Sick and Tired”) notes that “the competing demands of work and home often have greater adverse health effects on women than on men. Caregivers, the majority of whom are women, are almost twice as likely to report having chronic conditions such as heart disease, cancer, diabetes or arthritis.”

Dr. Jane Martin, a Long Beach psychologist and the California state education director of the APA, offers another reason women are stressed out during hard economic times: money management.

“Women are often the members of the family who are in charge of the family budget,” she said. “It becomes their responsibility to figure out how to make less dollars stretch to cover what’s needed for the household. They may have to make decisions about what the family has to do without and may therefore bear the brunt of the disappointment or even anger of family members — especially children — who have to make lifestyle changes.”