Our healthcare system debate is getting more heated all the time.  Mobilization for Health Care that supports establishing a single pay system is now organizing “sit ins” at the various insurance office company offices and getting arrested.  These are peaceful demonstrations with people basically protesting and chanting.  There are several videos on the sites that have been posted and I included a couple here with a retired nurse and retired doctor who have joined the ranks.

In Los Angeles the building was put on lock down.  In Washington DC their demonstration in the rain made the news.  14 were arrested in New York, 7 in Chicago and more.  October 15th this week was the date selected to rally at several health insurance offices.  At the rally in Washington DC, they attempted to get someone from Blue Cross on the phone, and no response.  Recently I posted about another group, Mad As Hell Doctors, and you can read more at the link below.

Citizens are getting more outspoken with regard to reform and the groups are establishing their voices.  I watched the one video from New York and it looked as if employees were coming to work to find the the “Sit In” group in the lobby and one turned around and walked out the door. 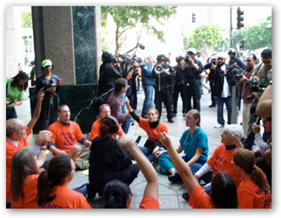 Again, it’s back to the algorithms that are run to “score” us, assign our risk as a “body” and deny coverage, care and claims.  We have had years of this and countless news reports.  You can’t go on the internet one day and not see a new list of posts.  With reference to profits, human lives and our healthcare just appear to be one more commodity traded on Wall Street today and the respect for your fellow man and woman has been in the sake of saving the banking economy, not the US economy.  BD

If You Think The “So Called Death Panels” are bad, read about the Human Hedge Funds

Chanting “patients not profits,” citizens and health care providers attempted to enter the lobby of a Blue Cross office in downtown LA. When the police stated that they had put the building on lockdown, protestors sat down in a circle in front of the door. Several people were present who had been impacted by a harmful denial by a health insurance company. These sit-ins are part of a national mobilization involving rallies and acts of civil disobedience at health insurance company offices in New York, Washington, Phoenix, Palm Beach, Portland, Boston, Cleveland, Los Angeles, and Reno.

On September 29th in New York City, the Mobilization for Health Care for All launched a national campaign of "Patients Not Profit" sit-ins at insurance company offices to demand an end to a system that profits by denying people care. We want the real "public option": Medicare for All, a single payer plan that cuts out the profit and puts patients first.

Palm Beach Post article: 6 arrested for health care for all at Humana office in Palm Beach!

Sit-in and arrests in New York. 14 arrested to stand for health care for all!

12 Arrested in LA for Health Care for All!

Together, through this campaign, we can turn the tide and win the fight for health care for all. To succeed, we need to organize sit-ins in as many cities as possible in the month of October. The campaign began in New York City on September 29th and continues in Chicago on October 8th and in cities across the country on October 15th. After the 15th, we will continue to organize actions in as many cities as possible until we win health care reform that ensures that the insurance companies no longer stand between the American people and the health care that we need. It's time to cut out the profit and put patients first with Medicare for All. 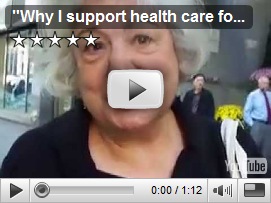 The mobilization was launched two weeks ago when 17 people were arrested at an Aetna office in downtown New York City. Last week, 7 were arrested at a Cigna office in downtown Chicago. Today, over 54 people were arrested at insurance offices for United Health Group, Wellpoint, Humana, Cigna, Medical Mutual, and Blue Cross. In several cities, police put the insurance company buildings on lockdown and refused entry to all. By 6 PM PST, the action in Phoenix, Arizona, was still ongoing and number of arrests was uncertain.