This is terrible as the 2 people who could donate and match, can’t or won’t be tested as they could possibly lose or have their health insurance rates hiked up beyond the ability to pay.  If you do donate a kidney and when you apply for health insurance, now 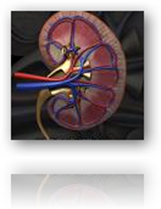 you have a pre-existing condition?

It’s back once again to those “algorithms” they run to asses risk.  We passed GINA, but does that really protect us against denial of coverage as in this case where the test results from a DNA based test can be used by insurance companies?  HHS is still trying to figure this out.

HHS Attempts Clarifications on GINA – Time to Further Confuse This Issue Too With Insurance Access?

This brings me back around once more to algorithmic centric laws that spell it out without 1300 pages of text.  Submit and have an agency certify those algorithms, so we have a definite answer.  If there’s a change, have it re-certified or denied.  We need to move up to the 21st century here.  The longer we keep tripping around on words and can’t test run those algorithms and formulas used, people die.  Certify those Algos, just like we do for EMR/EHR systems and write them to law when affecting healthcare.  Congress does not have this problem though as their policies don’t have a provision to eliminate and score individuals for “pre-existing” conditions.

The two sons could face all types of problems not only with insurance premiums, but what if they found the same hereditary factor?  Would they now have a pre-existing condition?  Again, time for a new way of creating laws as now it appears we are trying to define GINA or allow exceptions for the purpose of risk management.  The LA Times recently pursued this question with insurers and did not get a definitive answer from any of the insurers.  Living people who want to help save a life are penalized and the only what might be called “save” donating individual appears to be a “dead” donator.  Does this make sense?  Nobody has to worry about risk management with a person who is deceased, right?

People who donate organs should be rewarded, not penalized.  BD

Newser) – So dear old dad desperately needs a kidney, and the docs say you're the best fit. Tough luck, writes Nicholas Kristof in a look at the case of David Waddington, whose two sons can't donate—because pre-donation screening might reveal to insurance companies that

they have the same genetic condition he has.“At the time David needed a transplant, the people closest to him couldn’t even offer a lifesaving donation—for insurance reasons,” Waddington's wife tells the New York Times columnist.

But because Waddington's sons dared not get tested, they also couldn't get medication that could stave off the disease—until one ended up in the emergency room with, you guessed it, kidney disease. So while Congress has "first-rate health care for themselves and so perhaps don’t appreciate how their posturing forces people like the Waddingtons into impossible situations," Kristof hopes "they can find it in their hearts to overhaul the disgrace of the industrialized world."