When you outsource to another country, this is always a potential occurrence with those who are less than honest, and it could happen anywhere as 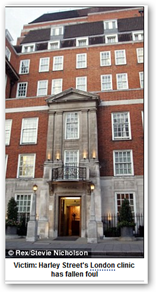 those folks are among us world over.  The story says the clinic contracted with a 3rd party who did the actual outsourcing.  The going price on some records was as little as $4.00 and there was complete data from the NHS files included.

A couple years ago there was a story about a transcription service holding a US doctor’s transcription records hostage until he paid a larger rate, called extortion.  It comes back to being able to know and trust who you do business with.  Outside your own country, US or otherwise you don’t have the normal laws that may protect you within your country, so perhaps time for some global laws that any country would be able to enforce in a case like this.  BD

NEW DELHI: In a development that is certain to lead to a hardening of stance on the outsourcing industry by the western world, investigations

conducted by a British TV channel have come up with the stunning revelation that confidential medical records sent to India for computerization are being offered for sale, triggering heightened concerns about breach of data security here.
The revelation has forced police of the two countries to join hands to launch an official investigation into the data pilferage of the records stored by the Indian BPOs. If found true, the allegations could hit the flourishing BPO sector in India hard, fuelling doubts about their integrity and efficiency.