Robotic Surgery for Prostate Cancer – Are the Surgeons Getting Enough Training

This has been in the news of late with higher rates of incontinence and according to the study, it’s not the machine itself, but rather the physician doing the surgery.  This article makes a good point about the required training needed before doing an actual procedure.  This may be more prevalent with prostate cancer surgeries since they seem to have the top billing as far as type of procedures performed robotically.

Beth Israel Deaconess Medical Center did not have one for the longest time and then low and behold, CEO Paul Levy cried “uncle” and gave in and made the purchase, as it was felt that without the robot, the surgeries for prostate cancer would go to other hospitals.  Now the NIH has given the hospital a grant to run a study to compare the two types of surgery, with and without robotics.

The robot can get into smaller areas and it has been seen on television many times on the news where there is more flexibility with the hands in being able to rotate 360 degrees if needed, something we don’t want to try with out hands and of course not possible.  I would say myself with all the tech work I do with computers that a weekend course is probably not near enough to become proficient.  It is a major change going from hands on to use the controls at the computer.  At any rate, the outcome of the study will be interesting to see if the numbers change since the robot is also being expanded for use with other procedures.

Sometimes on the tech side of things too as an example with an EHR, there may be more training there too than meets the eye and just the voice of experience of my own, the crash courses don’t usually do it and some one on one is usually required.   The robot is a computer and thus so, we might just be looking at the same thing, and perhaps additional simulations might be an answer along with a time element extended.  I can’t tell you the number of times I have seen sheer frustration (and heard it too) from physicians learning to use an EHR and some of them operating a computer too for the first time.  The robot and EHRs might really have something in common here.  BD 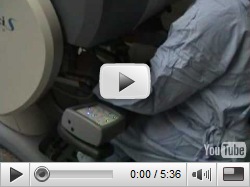 Shocking news from the Boston Globe's Liz Kowalczyk: minimally invasive prostate removal, often performed with surgical robots like the da Vinci, more than doubled the rates of incontinence or impotence experienced by patients compared to those who opted for traditional open surgery.

The study, which has solid but imperfect methodology, was published recently in the Journal of the American Medical Association. Other findings: success at controlling the cancer was about the same; minimally invasive got patients home in two days instead of three, and those patients also had fewer short-term complications like respiratory problems. In a nutshell, short-term effects were better with minimally invasive; long-term effects were better with traditional surgery.

Paul Levy, president and chief executive of Beth Israel Deaconess Medical Center, lamented in his online blog in February 2007 that surgeons at his hospital were lobbying him to spend more than $1 million on a robot, “despite lack of evidence of its benefits.’’ They told him that without it, prostate surgery cases “would likely plummet by 2010 and BIDMC would consequently quickly become a non-entity in regional prostate cancer care.’’