Japan is known for their love of robots, so now we have a new one, the Swinebot.  Yes, they did it correctly, it looks like a human and not a pig and

they may not have issues there with people worrying about eating pork, which of course is ok as it is an airborne flu.

The poor robot sits around sick all day long with the Swine H1N1 flu.  If you don’t treat the robot correctly, I guess it dies on you, as it quits breathing.  Below is another video that shows a robot coughing.  BD 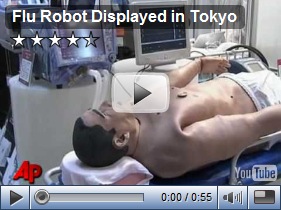 Here’s one that coughs at you too.  This one is here in the US so we have a different bot. 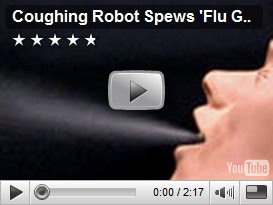 The robot is meant to be a diagnostic tool for physicians. The robot shows symptoms of someone having a severe outbreak of the flu including moaning, sweating and difficulty breathing. If the robot is not treated properly it will eventually stop breathing.