This happened in San Diego and is on the FBI list.  This is sad as more thank likely are trying to survive.  This also says something for us as humans I

think as how could not not catch up with a man with an oxygen tank, and where was security?  If things were not so bad we would not have seniors robbing banks!   Video of the report.

Again, another sign of the sad times we are going through now.  I am guessing the employees and others may not have even had the heart to go after him.  They did not disclose the amount of money he actually obtained, but it stated he wanted $10,000, not a huge amount by today’s standards and perhaps he needed it to pay for his healthcare if he was carrying an oxygen tank.  BD 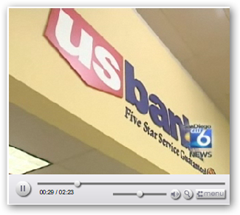 SAN DIEGO - A man in his 70's or 80's is on the loose after he robbed a bank Friday. It is the third time in two months that banks have been hit by elderly robbers. The robber got away with an undisclosed amount of money.

Witnesses says the senior approached the teller at a US Bank inside a Vons on Carmel Mountain Road Friday afternoon. He claimed he had a gun and would shoot one of the tellers if he did not receive $10,000.

Have Tough Times Turned the Elderly to Crime? - San Diego 6