The sit ins this week were at Human, Blue Cross and United Healthcare and apparently with the help of cancer patient Robert Darling who was

inquiring about his bone marrow transplant where he’s been waiting with no communication for 5 years from anyone other than assistants who could not make or relay a decision.  They were able to get the attention of a employee of United who relayed the message that the CEO of United Healthcare would meet with the group within a week.  The peaceful sit ins this week in San Francisco put the building under lockdown.  More arrests were made this week with people refusing to leave and peacefully arrested for being on the premises.

Video from Rhode Island Sit In.

You can read more about the activity from a couple weeks ago at the link below.  There are both retired and active physicians and nurses participating in this group as well as consumers.  Earlier today I had posted about Aetna’s CEO getting some trick or treaters with their issues and notes left on his doorstep.  Stay tuned as the movement for single payer progresses.   BD

Yesterday [Oct. 28th], the next wave of the Mobilization for Health Care for All began with great success. See below for a list of media coverage of the actions.
In 11 cities across the country, hundreds of everyday Americans who want Medicare for All confronted the insurance companies and demanded that they redirect the money they're spending to control our democracy to pay for the care they deny to their members. Almost every company refused to even talk to us, and 37 people were arrested including doctor Matt Hendrickson at a Cigna office in Glendale, California. Dozens more - like the 30 people who blockaded the Blue Cross office in San Francisco for hours - sat in but weren't arrested. 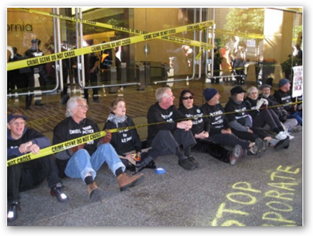 In Rhode Island, however, the protestors who joined cancer patient Robert Darling in occupying the UnitedHealthcare office won the first concessions of our campaign - a company representative agreed to give an answer to Robert about paying for his previous bone marrow transplant within 24 hours and to arrange a meeting for the group with the UnitedHealthcare CEO within a week! After 115 arrests in 18 cities, these companies are starting to feel the heat of our movement. And with more than 900 people now signed up to sit-in, this battle is just beginning. 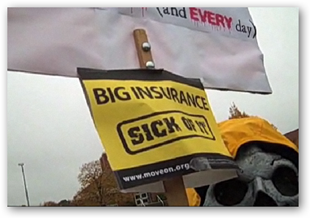 Today, the Mobilization continued in Louisville, Kentucky and Baltimore, Maryland. The brave folks in Louisville are in the 9th hour of their sit-in inside the Humana headquarters as we send out this email. Humana is trying to wait them out, but may are prepared to stay overnight if they have to.
In Baltimore, four people were arrested at a CareFirst (Blue Cross) office including two doctors. One of those doctors, Margaret Flowers of the "Baucus 8," has withheld her name and is planning to stay in jail until the CEO of CareFirst, Chet Burrell, agrees to a public meeting with her.