I think everyone who has been in a hospital for care at some point in time can agree, they can be noisy.  The Yacker Tracker at the facility in Hawaii helps keep this in check.  Not only do we monitor data today, but add noise to the list too.  It looks very similar to a traffic signal.  They also have a

“low tech” answer for nurses that do not want to be disturbed, those giving medications to patients as one example.  Some nurses might like the idea of wearing one full time(grin).   At any rate a visual that notifies others to no disturb when concentration and focus is needed and this will also contribute to less potential errors. BD

Kaiser Permanente Hawaii has an answer for a common complaint from hospital patients that they can't sleep because it's too noisy.  It's a Yacker Tracker.

The noise meter, installed last August in 15 units covering all nursing stations at Moanalua Medical Center, works something like a traffic signal. A computerized light stays green until noise rises above a certain level, then a yellow warning light starts flashing.

The Moanalua hospital's quietness increased to 48.64 percent from January to April this year, up from 35 percent during the same period last year, she said. The average for hospital quietness nationwide is 50 percent, according to an Avatar survey, she said.

Kaiser also has a solution for nurses who don't like being distracted when giving patients medicine. An inch-wide reflective sash -- the equivalent of a "do not disturb" sign -- was designed for them at Kaiser Permanente's Sidney Garfield Innovation Center in Northern California. Kaiser Hawaii implemented it last August along with the noise meter. 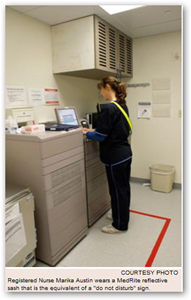 Barring an emergency, the MedRite "non-interruption gear" signals everyone to leave the nurse alone until it's removed.