Verizon And Casio Introduce Android Smartphone Ruggedized for Hospital Use

Security is good, EAS works for me so we have an Android system here with some

Microsoft technologies added in.  It would also function in other rugged areas too besides hospitals, but working in hospitals is getting getting pretty rugged these days and when you walk around all day with a device a tuff one can’t hurt.

There’s no 4G but the last few days we didn’t have it anyway <grin>.  It does free standing WiFi to connect other devices.  I remember just a few years back when I got a EV-DO router I thought I was really hot and connected and now this is moving to be pretty much a standard feature with wireless capabilities.  The price is around $200 for a 2 year agreement (watch the fine print now that the Supreme Court has ruled that we have to be able to interpret all of it ourselves).  The compass feature was pretty neat in looking at it and there are a few more things it does, like watching the tides, gazing at stars, etc. and it is an enterprise solution smartphone too.  BD 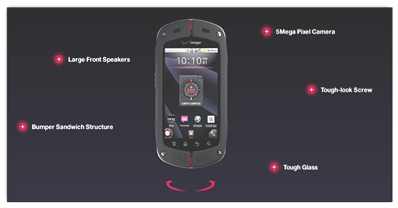 The G'zOne performs enterprise tasks such as downloading blueprints, files and pictures and managing a field force. It also allows workers to access inventories and capture signatures.

The device runs the Android 2.2 Froyo operating system and operates on Verizon's 3G/EV-DO network. In addition, it serves as a WiFi hotspot for other devices. The unit doesn't support 4G connectivity, however.

It operates in eight modes, including Earth Compass and Walking Counter, which tracks steps, distance and energy consumption.

The G'zOne also incorporates a 5-megapixel camera with auto-focus, LED flash and video capture. Plus, it comes with 1GB of flash memory and 512MB of RAM.

Verizon will offer the G'zOne starting April 28 for $199.99 with a two-year customer mobile service agreement. The carrier's unlimited data plans start at $29.99 per month.