I’m not going to pass judgment one way or another here but obviously someone didn’t have a back up plan in place for a server failure.  I have included a screenshot with the information blurred but you can visit the threads and read for yourself.  From reading the threads, this appears to be a home monitoring system for ECGs for cardiac patients and the initial posting here appears t show they are not able to get any support from Amazon.  You can read all the subsequent comments from others on the thread here, but again I look at the posting and it doesn’t seem that someone would go out and post a desperation notice as such without exhausting their knowledgeable avenues of where to go. 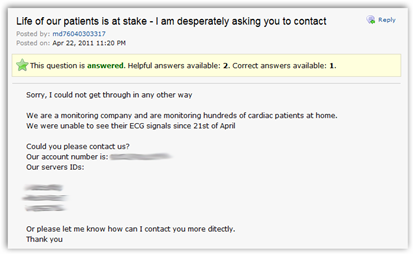 Also important to note, this is not a hospital system as noted in the comments and the company has lost the capability to see the patient ECGs in their system. We see a lot of these services on the web and basically as a consumer we may not really know what type of services and software are being utilized.

Later you can read where 2 of the 3 servers come back up online, but not the one they rely on to monitor the patient ECGs.  Perhaps due to the holiday the number of support individuals might be reduced as well. When following the threads we see that since the 21st of April they have been down and as of the 23rd, no word from

Amazon and several of the commenters make reference to the promise of the 99.95% uptime.  Later you can see additional comments from the original person who posted the initial call for help that it is in fact a home system, but the initial post says “Life of our patients at stake”.  Before we had such services perhaps many of the patients would not have this monitoring service available, but like anything else when a service as such is subscribed to and paid for, we want it to work.

Hopefully there was not an incident missed but we have two apparent issues here with first off, no back up plan and secondly the non response from Amazon, so poor planning initially created the “desperate” situation.  As one comment contributes fail overs on such system run into a bit of money so if a company is offering such a service I would also say prepared for the fail over so as not to end up in a situation like this.  One commenter really gets on their case about having the right tech support and the importance of the critical care monitoring of the patients.

“Take action to make sure another outage of EC2 doesn't put you right back where you were 24 hours ago. Don't assume that the problem is fixed. Don't assume that you are back to 99.9% availability again. Do whatever is necessary e.g. arrange for technical support from a local data center or provider NOW, so that you'll have back-up in place, or in progress with support right there with you on site or quickly available. Price is of less concern. The cost you've already incurred by not providing monitoring services to your patients (even if they are not critical care) is more significant.”

too about how many other mission critical applications and services were also affected, good question I think and makes we wonder if others were better prepared?  If you are a consumer using and paying for such services, this is a good reminder as to what could and should not have occurred, but it does.

We are solicited constantly with companies wanting to monitor our vitals and report the information back to doctors, hospitals, family members and so on every day that use 3rd party web applications like this one apparently offers, so for consumer I consider this a “heads up” and a warning to really investigate what you are getting and to be ready for system failures as such.  For the vendors that sell such services and system, a bigger warning, get your act together and have your fail over or server failure plans in place as in cases like this, it does not pay to cut costs in vital areas as such to lower the cost and it will come back and bite you when you least expect it.  I didn’t look further, but this could even be a monitoring service outside the US for that matter.

Again we don’t know who is the end recipient here and it could be doctors and hospitals but the service company in the middle is not able to provide the service and lets hope that any ECG negative occurrences that could be life threatening did not occur.  I’m sure we may be hearing more about this case as it evolves here but I would say that we some questions to be answered all the way around, not to mention any legal and/or other situations that may follow.  The FDA also just updated their standards for devices as such and it would not surprise me to see some investigations in this area as well that may involve server connections now as well as the devices.  Many such devices are now considered low risk, but are they when system fail?

Someone caught this on Twitter and that’s how I became aware of it.   Always have a fail over plan in place no matter what and hopefully this will drill that home and sad that something like this had to occur.  A failover can be a switch to a local server or another virtual host.  BD

Sorry, I could not get through in any other way
We are a monitoring company and are monitoring hundreds of cardiac patients at home.
We were unable to see their ECG signals since 21st of April

AWS Developer Forums: Life of our patients is at stake - I am ...