I included the 2nd two videos and there some humor from Jon but he’s actually taking a step back here to inform and discuss with Elizabeth Warren on how Congress and the Judicial System is trying to defeat the existence before anything ever gets started. 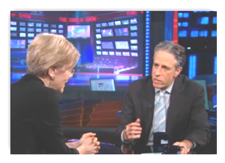 Today this was noticeable with a decision from the Supreme Court and you can read more here about how they voted today to allow companies to ban class actions in the fine print of contracts.

“Now, whenever you sign a contract to get a cell phone, open a bank account or take a job, you may be giving up your right to hold companies accountable for fraud, discrimination or other illegal practices.  The court’s decision today turns the Federal Arbitration Act of 1925 – a law that was intended to facilitate private arbitration between sophisticated companies – into a shield against corporate accountability.”

When you look at the fact that judges can’t even keep current with their own investments and don’t understand that stocks they have had for a long period of time with certain companies have changed, we are up a creek.  Mergers and acquisitions have changed the faces and models of operations of so many companies today and when transparency brings out their interests, we see stories like this one to where the answers are “well I had no idea”, because they don’t either read and stay current or just don’t care.  It’s happening more frequently and I am guessing the words “subsidiary watch” have not come to mind with enough of their decision making processes.

Here’s the first video where Elizabeth discussed the fight for the agency.

We are talking once more about “those algorithms” like what has been discussed on this blog for a couple of years.  She says its “code language” and you hear it right here form Elizabeth Warren, the code that distributes money.  Jon asks do they just start making up words….well close, they get coders to do the work.

What creates those complicated contracts that we sign, algorithmic processes and computers.  We are now to the point to where the complicated methodologies are too much even for judges to make an intelligent decision.  When you look at insurance contracts, look at the fine print and the constant business model changes.  Again nobody wants to put out the effort and digital illiteracy is creating the easy out to just dump on the consumer.  At some point there may be revenge of the “robin hood” geeks and we are already seeing some of this with anonymous and wikileaks and that will probably grow. Most professional IT people, like myself in this area are useless in this area because we focus on prevention and then only back track and fix the open areas that the professional hackers can break.

Rather than become participants and do the right thing we have those who know what is good for everyone else who are in the dark and are lead by the nose from those who have the power technologies to move markets, money and so on and they lead those who are not literate in how this is controlled and done by the nose and their reward is money of course while the middle class consumer gets nothing.  It’s a sad state of affairs but again I kind of think at some point in time the middle class hackers will continue to have their days and all of this will get uglier as you can’t continue to let greed and such methodologies thrive as the inside track may become a very dangerous place to be in the future.

We have already seen some of this with members of Congress getting additional security so again you have to wonder what’s next and when ethics and humanity are favored for greed, I don’t think it’s a nice picture of what we can expect in the future.  Here’s a solution for Congress and Judges to try and at least use some business intelligence for smarter decisions but it doesn’t appear that they have any interest rather than to just bail and be non participants.

The middle class continues to grow steadily in China and shrinks here and they have their own technologies these days as well so again if we continue down this path and continue to see those in power who lack digital literacy we are going to lose.  We have banks that build pseudo valuations around social network algorithms which have value but not like the algorithmic formulas are creating out there today.  When you are sick what’s going to cure you a drug or a social network?  Since when do the algorithms of social networks exceed the dollar value of many pharma companies all bound together?  That’s what we have out there and no solid tangibles to build wealth.  Many jobs created by technology are not permanent as they will not all make it, so that will always keep the roller coaster going until someone comes along with some more code.

Lobbyists waive a few dollars and the wind blows and when you listen to Elizabeth Warren speak and what she has gone through for a simple agency to help consumers, well that kind of says it all and today I do have to say with the President finally showing his birth certificate, he kind of had the last laugh as for 3 years we have watched the folks who are not focused, easily distracted with disruption, out of touch with reality get lost in a world of bickering and attention that meant nothing, but at least we know who those players are as of today.  It just keeps playing out over and over and have so many that can’t seen to find their focus and try to create values today from the past that can’t exist, digital illiteracy and continuing to be a non participant mostly at the heart of it, as it’s too hard, but we don’t get that choice as citizens to live in the 70s.

One last comment going back to the GOP pledge, digital illiteracy here with not even having the know how or knowledge to remove the lobbyists names as the authors, so Rachel had that one right even before the election and that’s what got elected and we are seeing the damage occurring as a result.